AVATAR: THE LAST AIRBENDER to be released on Blu-Ray

In extremely pleasant news, Avatar: The Last Airbender, the greatest fantasy TV show of all time*, is getting a snazzy HD re-release for the 10th anniversary of its first run ending. 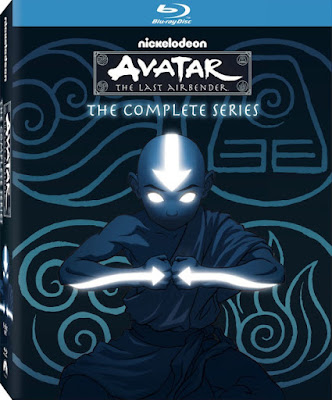 The show will arrive on Blu-Ray on 1 May in a box set containing all three seasons, as well as some new documentaries, commentaries and an "animated graphic novel" called Escape from the Spirit World. Sadly, a lengthy video featuring M. Night Shyamalan apologising for the Last Airbender live-action movie will not be included.

Avatar's spin-off sequel series, The Legend of Korra, is already available on the format, allowing completionists to assemble the combined seven seasons of the two shows for a complete HD run-through (and hey, remember to throw in the canonical graphic novels as well!)..

* Yes, including that one.
Posted by Adam Whitehead at 01:12

Very exciting news! And I agree, it is probably the greatest fantasy TV series of all time. Although I personally would be hard pressed to choose between it and Fullmetal Alchemist Brotherhood.

I agree with Stonewielder. Avatar: The Last Airbender is my favourite fantasy TV show of all time (it's my 4th-favourite TV show ever, just behind Mad Men, The Wire and The Sopranos, in that order).