Warhammer, the game of fantasy battles, celebrated its 27th birthday yesterday. SFX has a good, brief overview of the history of the game and setting. 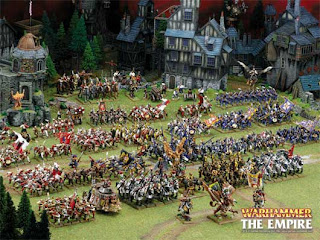 Warhammer, developed by Citadel Miniatures and then sold to Games Workshop, first appeared in 1983, rapidly gaining popularity and spawning several spin-offs, including the SF-themed Warhammer 40,000 and a continuing line of games based on Peter Jackson's Lord of the Rings movies. It also gave rise to the Black Library and its millions-selling lines of novels, such as Dan Abnett's Gaunt's Ghosts series (which have made Abnett the UK's second-biggest-selling SF author) and Graham McNeill's Empire, which recently won the Gemmell Award for Best Novel. There are also multiple Warhammer computer games, including a moderately successful MMORPG. The Warhammer tabletop game and attached miniatures continue to be popular, with the wargame recently reaching its eighth edition, and the first Warhammer film, Ultramarines (in the 40,000 setting) is due for release early next year.

Congratulations to the team at Games Workshop!
Posted by Adam Whitehead at 16:01

I played Warhammer Fantasy Battle a few times, years ago, and still have the hardcover rulebook (one of the editions with an orange-background cover painting). I was amazed how similar the rules were to those of the Squad Leader cardboard chit World War 2 game. But were fun, but could be a lot of work to play.

That should have read "Both were fun..."