Sadly, the news has broken that veteran actor Robin Sachs passed away last week at the age of 61. 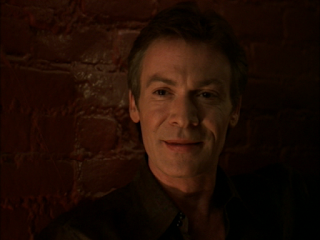 As Ethan Rayne on Buffy the Vampire Slayer.


Sachs is known for bringing his distinctive gravelley voice to numerous science fiction and fantasy roles on TV and film. He is best-known for his portrayal of Ethan Rayne, arch-enemy of Rupert Giles, in four episodes of Buffy the Vampire Slayer. He also had multiple appearances on Babylon 5, in which he played two roles, although, confusingly, each role had two names. He played the role of Hedronn, a member of the Minbari Grey Council, in two episodes and the TV movie In the Beginning. In the latter his character was inexplicably renamed Caplann. He also appeared as the Narn captain (and later general) Na'Kal in four episodes of the show, with the character now being called Na'Tok in his latter two appearances. Sachs is the latest in a surprisingly large number of actors who worked on Babylon 5 to pass away before his time.

Playing both a Minbari and a Narn on Babylon 5.


Also under heavy prosthetics, he played General Sarris in the 1999 SF spoof movie Galaxy Quest and General Valen in Star Trek: Voyager (in the episode The Void). In more recent years he has become known for voicing roles in computer games, playing multiple roles in Dragon Age 2 and voicing the popular character Zaeed Massani in Mass Effect 2 and 3. His last role was voicing the character of Ataman in the recent Resident Evil CG movie, Damnation.
Posted by Adam Whitehead at 10:55

Robin Sachs was also one of my favorite Audiobook narrators and a big supporter of the Audiobook community. I loved his reading of Glen Duncan's The Last Werewolf.

I should also add that his dogs are looking for a new home.

I heard about this the other day. I only ever saw him in his role in Buffy, but I've got to say, the guy had talent and he will be missed.