So, the second half of Game of Thrones' final season. Those were very definitely three episodes of television. 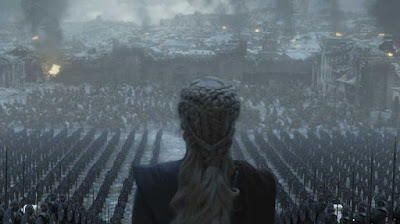 Game of Thrones is a series that, at its best, was impeccably acted, beautifully atmospheric and boasting tremendous production value and a soundtrack to die for. At its worst, it was over-melodramatic, confused in theme, badly-written, lacking in direction and relied too much on CG and spectacle to overcome its weaknesses. A perennial problem with Thrones is that it could be both of these things in the same episode. This has been going on since at least the first season, which managed to cram two of the best scenes in the series - Cersei and Ned Stark's confrontation in the garden of the Red Keep, and the thwarting of Ned Stark's attempted "coup" - with one of the very worst - Littlefinger explaining his character motivation and objectives to two random prostitutes for absolutely no reason - into the same hour.

But as the show continued, the ratio of strong material to weak tilted more firmly towards the latter. It would be simplistic to say that the show was great whilst it followed George R.R. Martin's novels closely (as it did for the first four seasons) and awful when it moved away (in the latter four seasons), rather that the show suffered when it not longer had a clear direction. The producers' hesitancy in whether or not they were going to adapt storylines from the fourth and fifth novels in the series is a clear example of this, resulting in the dire mangling of both the Dorne and Iron Island storylines because of a failure to commit to them early on, as they instead half-heartedly nodded at them in Seasons 5 and 6 and then rapidly retreated from them, to the confusion of fans and actors alike. The show needed a firm plan for the final four seasons to map out character and story arcs, and its failure to do this (or to stick to any such plan if it existed) irrevocably weakened the lead-up to the finale.

The final two seasons of Game of Thrones have suffered from a related problem: rushing. David Benioff and D.B. Weiss chose to end Game of Thrones in just thirteen episodes in the final two seasons rather than the standard twenty. This part of the story is one that George R.R. Martin envisages taking (at least) two thousand-page novels totalling just under a million words; for comparison the first four seasons of the show covered about 2,300 pages totalling just over a million words. Even taking into account that the show has pulled out hundreds of characters and dozens of storylines, it was clear that this was going to be rushed. I just don't think anyone was expecting it to be this rushed. Some episodes in earlier seasons could be criticised for a slow pace and lack of story development as characters sat around talking to one another; but often those same episodes were praised for their dialogue, acting and for firmly establishing relationships and setting up important worldbuilding and story elements for later on. Game of Thrones was never as subtle in its storytelling and characterisation as HBO forebears such as The Sopranos, Deadwood and The Wire, but at its best it wasn't far off. 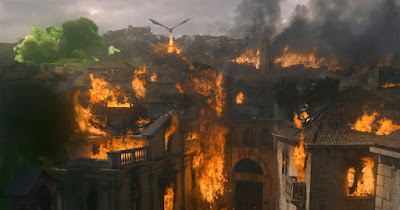 These final three episodes show the consequence of rushing your story and prioritising the plot resolution over characterisation. In this sense Game of Thrones makes the reverse mistake to Lost (another show with a problematic final season), which chose to focus on characters over plot and provided (mostly) satisfying character finales whilst providing only perfunctory story resolutions: after six seasons of setting up intricate mysteries, the show ended with...a fistfight on a clifftop and then the characters chilling out decades later in the afterlife? Game of Thrones goes in the opposite direction and provides all the big battles, last-minute betrayals and bittersweet moral dilemmas fans might have been hoping for, but to get there it has characters being either much stupider or much smarter than they usually are or going through torturous character development that really needs about two full seasons to unfold convincingly in about three scenes (or in Daenerys' case, mostly offscreen in the gap between the fourth and fifth episodes, which was a...bold choice).

Going into specifics, The Last of the Starks may not be the worst episode of the entire series, but it is cheerfully the dumbest, featuring a fleet of medieval-era ships equipped with advanced ground-to-air missile capabilities (including the ability to fire through or around solid matter) and cloaking devices. What should be a shocking and upsetting moment instead turns into a moment of outright, laugh-out-loud comedy, undoing the good work early on of a fun post-battle celebration scene. 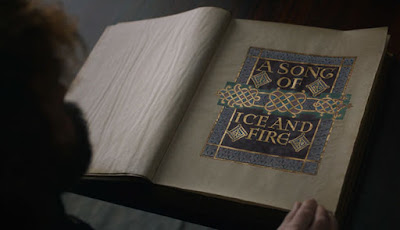 The Bells, by contrast, may be the most visually impressive hour of television ever filmed. Both the CGI and the practical effects are overwhelmingly impressive, Ramin Djawadi's score elevates everything to the next level and Miguel Sapochnik's ground-level camera work as a city dies is frequently breathtaking. There are problems with logic (the high-tech AA wooden missile system from the previous episode is now apparently non-functional because reasons) and character, but the brute force of visual spectacle and atmosphere almost overwhelms it. This is television created through brute force shock and awe, with all subtlety and nuance pounded into rubble. It's undeniably impressive and, with better character work and build-up, it could have been one of the show's finest hours. Instead it has to settle for being an undeniably visceral experience that completely rewrites audience expectations for the level of production value television is capable of achieving.

The Iron Throne ends the series and has to satisfy eight years of audience expectations. How much it succeeds will vary tremendously by each viewer, but I found it to be a mixed bag. Some characters have note-perfect endings, others have reasonable endings but without a lot of good setup for them and others just end in an extremely random (verging on non sequitur, in the case of Bronn) place. It isn't the unmitigated disaster it's been described as in some places, but neither is it satisfying overall, nor hitting the bittersweet tone it's clearly aiming for. If anything, the ending for quite a few of the characters feels a bit too neat and happy, which is not something Game of Thrones should ever be accused of.

In the final analysis, these last three episodes again represent Game of Thrones at its very best and its very worst. Fantastic casting, acting, production value, effects, music and costumes let down by sloppy planning and extremely variable writing. But for better and worse, it is done and it has completely rewritten the rules of television as we know. The coming decade of television will be written and produced in Game of Thrones' shadow, and it will be interesting in an increasingly fragmented landscape if another show can come along and ever have the same kind of impact.

What do you think the worst episode of the series was, then, if it's not The Last of the Starks?

I was certainly taken aback to see Daenerys transformed into the love child of Adolf Hitler and Genghis Khan over the course of one and a half episodes.

I can very much second your thoughts. Benioff and Weiss were the editors Martin always needed, and he the author to write things that they can refine. They were indeed losing focus and direction. A shame, after they solved the Meereenese knot quite nicely for the show they didn't turn out to be nearly as good at ending the series. There were strong moments, it just didn't go together nicely. I also don't understand why they rushed so much. Nobody doubted they would rush after S7, but so much...! Their Star Wars contract is often cited, or other reasons. Whatever, it's a pity.
I hope Martin manages to show a better ending, maybe the series and the books will diverge a lot more now, Martin taking inspiration from THEM rather than the other way round.
I for instance wish for a grander Ice vs Fire finale with the Night King, and more involvement of Red Priests than casting fire enchantments on swords and lighting up trenches. I think the priestess Kinvara briefly seen in S5 could have appeared more often for instance, besides the short statement telling Varys he would have nothing to fear if he would stand by his Queen. Now it makes sense, but I think the whole Dany as Azor Ahai thing is going to be much bigger in the books.

Adam, I think this is a really fair and well-rounded review. Your final two paragraphs resonate particularly well. Nicely written.

Pretty much spot on Adam. I still dont understand how HBO let them get away with the reduced number of episodes. 6 more episodes over the two seasons would have resolved quite a few of the issues. Not the crappy dialogue mind.

Totally agree felt rushed at the expense of producing a good final arc. I don't think that lies with either not having the original source material to work off or HBO commitment to the series as I'm pretty sure HBO would have doubled the episode count for the final two seasons if asked.
The rush is clearly David Benioff and D.B. Weiss wanted to move onto other projects. Whether its boredom or the Star Wars dollars its a shame they missed out on delivering something truly epic by banging it out double time.

Roll on the books!

That's wrong comparison, because she was clearly a Lenin clone. She was presented as very dangerous fanatic early on and her transformation was absolutely logical - however, it was too rushed.