In surprising news, former Game of Thrones showrunners David Benioff and D.B. Weiss have parted ways from Lucasfilm after being announced as writing and possibly directing the next Star Wars movie after The Rise of Skywalker, due for release in 2022. 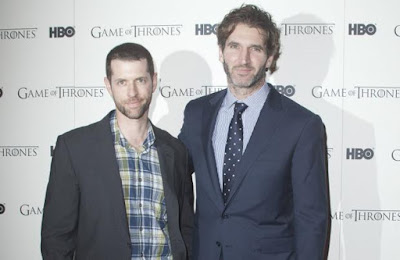 Benioff and Weiss signed with Lucasfilm and Disney eighteen months ago to develop a fresh Star Wars film series that would be set in a time and location far-removed from both the nine-part main "Skywalker Saga" and the stand-alone spin-offs. Director Rian Johnson is also developing a trilogy with an eye to setting up a new setting and cast of characters for the films. According to other reports, either setting may be a revamped version of the popular Knights of the Old Republic setting, with writer Laeta Kalogridis developing early concepts for the idea, including possible direct adaptations of the popular video games.

Benioff and Weiss's departure appears to be due to their massive $200 million development deal with Netflix for new TV series and projects. It is unclear what these new projects will be, or if the money was well-spent; Benioff and Weiss experienced a critical drubbing this week after an interview in which they seemed to suggest they didn't know what they were doing with Game of Thrones, ignored the primary themes of the novels and admitted they were more interested in adapting set-pieces and stand-out scenes than the story as a whole. Benioff and Weiss's former partners at HBO also seem to have distanced themselves from the producers, refusing to even bid with Netflix to retain their services, quietly dropping their Confederate TV pitch into a dumpster after the negative publicity it received and pivoting hard to supporting and working with George R.R. Martin on other projects.

The critical opprobrium and disdain may be overstated - Benioff and Weiss did bring the books to television and made it the most popular contemporary fantasy series in the world, as well as giving HBO it's biggest-ever TV hit - but it seems that the industry has certainly cooled towards the writing team who, just a couple of years ago, could do no wrong.

The news won't help the headaches over at Lucasfilm either, who have been experiencing a lengthy run of directors dropping out or even getting fired on Star Wars projects. They will now have to either accelerate plans for Rian Johnson's next Star Wars movie or they will have to find a new team to step into Benioff and Weiss's shoes to bring the next film to the screen.
Posted by Adam Whitehead at 22:17

Those two, if they had been Thespians, 4 centuries ago, would have been pelted with rotten vegetables to say the least.

They owe us some apollogies, you are too kind towards them, dear Adam.

They owe their success to adapting material that already existed. When they had evolved to point beyond Martin's writing, things became stinky. Simply put, they have a good creative vision to develop pre-written content but sucked when they had to rely on their own storytelling. Not a selling feature for a Star Wars franchise where they would have to rely on their uninspired storytelling track record.

Whilst they did a poor job with writing in the last few seasons the idea that "They owe us some apologies" is a perfect example of fan entitlement. They don't owe you a thing.