Lucasfilm and Disney have opened discussions with director Taika Waititi on helming a Star Wars film. 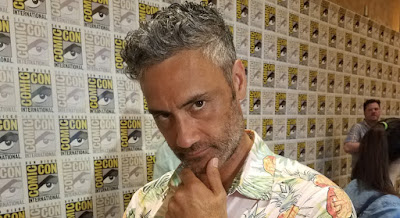 Disney already has a productive relationship with Waititi, who is credited with achieving a major franchise turn-around after directing Thor: Ragnarok (2017), not to mention playing the role of Korg in both Ragnarok and Avengers: Endgame. Waititi has also directed an episode of the well-received TV series Star Wars: The Mandalorian and voiced a droid character, so has already dipped his toes in the Star Wars universe.

Waititi, who presumably never sleeps, is also an executive producer on the comedy TV series What We Do in the Shadows and is basking in the glow of success of his latest movie, Jojo Rabbit. He's also just finished directing another small-scale movie, Next Goal Wins, and is in pre-production on Thor: Love and Thunder, which is expected to start filming in the summer for release on 5 November 2021. Waititi may fit in some more TV work before then as well.

As a proven and fan-popular pair of hands, Waititi is a good choice to helm a Star Wars movie. It's unclear if this would be the Kevin Feige-produced stand-alone film which is currently in development at Lucasfilm, although this would make sense given Waititi and Feige's strong collaborative bond. There's also the Rian Johnson-helmed trilogy still in development at Lucasfilm, although Johnson reportedly would be directing at least the first film in that series himself.

If Waititi does sign on, it likely means the end of his Akira live-action project. Waititi had put the project in active development and successfully developed a script which restored the Neo-Tokyo setting and predominantly Japanese cast (the previous draft had been set in New York instead), but it sounds like the studio was having cold feet and Waititi bailed to make the new Thor movie. If Waititi rolls from that into Star Wars, thus puts Akira off until sometime in the middle of the decade at best.

Whatever the case, Lucasfilm need to get a move on if they want to release a new Star Wars movie in 2022. Originally that was going to be the David Benioff/D.B. Weiss-developed film, but their departure for Netflix has left a production gap which Lucasfilm are anxious to fill.
Posted by Adam Whitehead at 23:35

A comedy director for Star Wars sounds like a terrible idea. One of the biggest problem that killed the previous Disney movies were the silly jokes that destroyed every single moment of tension.

Waititi is known for his comedic flair, but he is not just "a comedy director." His work often has emotion, pathos and action as well. He's certainly not "a comedy director" in the same way as Lord and Miller were, which caused problems on SOLO.

Taika is a good enough director that he probably could make a decent, serious Star Wars but I doubt Disney would be hiring him to do anything other than do a movie with more humour in it. They'll be hiring him for his strengths, not in order to take a risk.

This is a bad idea. Disney treats Star Wars as a cash cow, and will want a lot of control over the end product. Solo and Skywalker are just two of the movies that had a lot of studio oversight. I hope for his sake that Taika don't take the job

We'll never get Akira, will we?

Do you realize that comedy is the opposite of silly jokes? I mean, it's hard to be good at comedy and silly jokes can be made by almost every writer, so don't mix past mistakes with clever comedians (and have a look to his take on the last chapter of The Mandalorian to have a better idea)