The Good Old Games website - which 'rescues' old PC games, makes them compatible with modern PCs and reissues them at competitive prices - has gotten around to releasing Baldur's Gate II: Shadows of Amn, one of the greatest (and largest) computer roleplaying games ever made. The GoG edition also comes with its huge expansion, Throne of Bhaal, included. 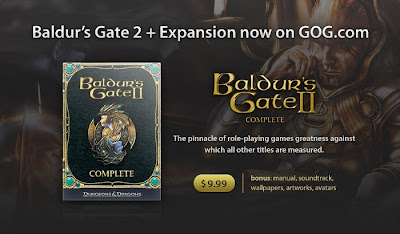 "The eyes, Boo, go for the eyes!"
GoG have been reissuing a large number of the old BioWare and Black Isle (now Obsidian) CRPGs and this completes the set. Also available are Icewind Dale (including its two expansions, Heart of Winter and Trials of the Luremaster), Icewind Dale II (including it's 'adventure pack' containing new items), Neverwinter Nights (including its three expansions, Shadows of Undrentide, Hordes of the Underdark and Kingmaker) and the legendary Planescape: Torment, as well as the original Baldur's Gate (and its expansion, Tales of the Sword Coast). There's also Fallout and Fallout 2, for those fans of Fallout 3 and Fallout: New Vegas and want to see how the saga began.

The Baldur's Gate games and their expansions form one giant mega-game which will take you well north of 250 hours to complete and much more to see every possible permutation of characters, storylines and endings. If Planescape: Torment is The Book of the New Sun of computer RPGs, Baldur's Gate II is The Lord of the Rings, a vast epic of immense scope. It's the largest CRPG BioWare have ever made and probably ever will, and it was the inspiration for their own, later Dragon's Age series of games.

The best way for modern gamers to experience the series is using the Tutu mod, which allows Baldur's Gate and its expansion to be run in the Baldur's Gate II engine, which has superior graphics resolution and more features. You can also carry your BG1 character over to BG2 and continue the adventure through the entire series, which is highly recommended (even if it will take you a long, long time to do it).
Posted by Adam Whitehead at 13:50

Price isn't great considering you can get the complete series from Amazon for £9.99 with disks

Yeah but 10 pounds is damn close to 20 bucks. IMO better than the discs because it comes with no DRM and because you can DL it an infinite number of times to any PC.