CDProjekt's new game based on Andrzej Sapkowski's Witcher books and stories has been given a final release date. The Witcher 2: Assassin of Kings will be released on 17 May 2011. 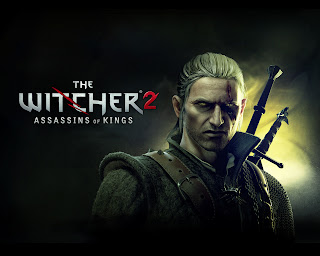 Brooding albino warrior for hire. May assassinate as well. Possibly kings. Fee negotiable.
The Witcher, released in 2007, was an unexpected, huge success, with the game shifting more than one million copies in the first few months on sale. For a PC-only roleplaying game, this was a remarkable achievement. Sales were fuelled by Sapkowski's extremely high popularity in Europe, the game's use of BioWare's Aurora engine (which attracted interest from BioWare fans waiting impatiently at the time for Dragon Age) and by good reviews, despite some criticism of the game's translation issues and loading times. An 'Enhanced Edition' released a few months later fixed these problems, leaving behind a very solid RPG.

On the book front, the UK release of The Witcher novels and short stories continues to be plagued by issues. So far the first short story collection, The Last Wish, and the first in the five-volume novel series, Blood of Elves, have been released, with the latter winning the inaugural David Gemmell Legend Award in 2009. However, there is no sign of the second short story collection (The Sword of Destiny) and the second novel, Time of Contempt, has been repeatedly delayed, although it currently has a mid-2011 release date.
Posted by Adam Whitehead at 18:27

I like the idea of an Albino hit-man. Come to think of it, I don't think anybody's ever written the definitive Albino hero yet, which is odd when you think about it. You'd think such a striking character would have been gobbled up years ago. The only Albino I can think of is the one that helps out Prince Humperdink in "The Princess Bride," so it's wide open.

Sapkowski's fanbase would probably make a strong argument for Geralt being a contender for the role, although he's sometimes as much an anti-hero as a hero.

Please tell the first post was a sarcastic one. I cannot believe that Elric of Melnibone can be forgotten any time soon. Granted, he was more an anti-hero than Geralt is.

Walter rhein: they already did. anybody remember Elric of Melnibone?

I think The Witcher is perfect for gaming, but I wasn't too impressed with The Last Wish.

Elric is very definitely an antihero, I feel.