I've talked about this map briefly before, but renewed discussion on the subject of the size of Westeros and the Seven Kingdoms over at SFFWorld seemed to make it a good time to revisit it. This map was created by forum-member 'Tear' over at the Cartographers' Guild:

The map shows the sheer size of the continent of Westeros: about 3,000 miles (or 1,000 leagues) from the Wall to the south coast of Dorne. The city of King's Landing is about 1,500 miles south of the Stark castle at Winterfell (the two principal locations in the first novel and also in the TV series). This other map gives an idea of the size comparison between Westeros and Europe: 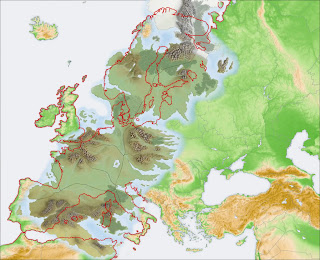 The map isn't quite accurate. If the Wall was on the northernmost cape of Scandanavia the south coast would actually be around Rabat in Morocco, which is a little bigger than the comparison map shows, but it's still in the right ballpark.

From what we know, the HBO TV series title sequence will show a raven being launched from Castle Black with the camera pulling out to show the continent, briefly zooming in to show locations of interest in the first season (presumably the Eyrie, the Twins, Riverrun and King's Landing), possibly with a view to changing in future seasons (Season 2 may also highlight Pyke, Storm's End and Dragonstone, for example). I'd also hope to see some kind of interactive map on HBO's website of the kind they produced for The Pacific. Interesting to see how they handle the geography in the series (an understanding of which is helpful to visualise the distances characters and armies have to travel).
Posted by Adam Whitehead at 18:29

Email ThisBlogThis!Share to TwitterShare to FacebookShare to Pinterest
Labels: a song of ice and fire, george r.r. martin, maps

Awesome! Thanks for sharing!!

I still think it's pretty cool that the map lines up right in terms of climate, since GRRM had a "the map is not to scale" policy for a long time.

It also means that the Martinworld can't be that much bigger than Earth.

sorry, but that is only a comparison with WESTERN Europe. Europe, as a whole, continues much more to the East ;)

Hmm. Not sure how that troll comment got through moderation. Removed now.