A new TV series is on the way, based on the S.T.A.L.K.E.R. computer game franchise (henceforth rendered STALKER due to full stop overuse tedium*) which consists of, to date, three games: Shadows of Chernobyl (2007), Clear Sky (2008) and Call of Pripyat (2010). STALKER 2 is now in development for a 2012 release, although given that Shadows of Chernobyl (STALKER 1, in effect) was about six years late, I wouldn't hold my breath for that. 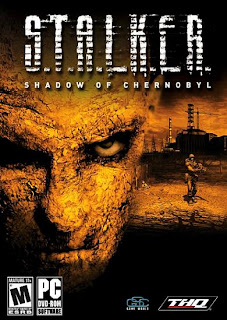 The STALKER franchise is based on the idea that, in the near future, a second explosion takes place at the abandoned Chernobyl nuclear reactor in the Ukraine. This second, inexplicable blast warps reality, creating anomalies which baffle science and spewing potentially useful (and profitable) artifacts across the surrounding Zone of Alienation. 'Stalkers', essentially mercenaries and scavengers who have entered the Zone to try to profit from the disaster, prowl the landscape, engage in running battles with one another and with government forces investigating the disturbances. The three original STALKER games are based around a central mystery relating to a man named Strelok and his journey to the very heart of the Zone and what he finds there. They are hauntingly atmospheric, astonishingly bleak, considerably scarier than anything in the Fallout series (which are very much the Diet Pepsi to STALKER's real deal) and, on release, were quite staggeringly bugged to the point of near-unplayability (although mods and patches have made them pretty stable now).

The TV series is from a Ukrainian production company and looks like it's quite faithful to the games, with equipment, anomalies and the 'weirdness' of the Zone being fairly similar. The quality of the acting does not look too great at the moment, though, and the fact it's shot on video makes it look a little cheap. Interesting to see how the final product turns out.

Intriguingly, the STALKER games themselves were based on the novel Roadside Picnic by famous Russian SF authors Boris and Arakdy Strugatsky and the Andrei Tarkovsky movie inspired by the book, Stalker. The three mediums are very different to one another, with only really the theme of bleakness and the words 'Stalker' and 'Zone' binding the three together. Still, it's appropriate that the idea has come around to a TV series, the only medium which it hasn't been used for previously.

The poster kind of looks like that bizarre Russian film "Guardians of the Night"...the one where the guy pulls his own spinal cord out of his back and uses it as a sword...

I'm going to try to make "full stop" happen in the States. We say "period"... I never liked that.

I came to the first one late when there had been enough patches to make it a stable PC gaming experience. Warts and all, it's a great game. Not since shuffling through the volcanic ash in Morrowind: The Elder Scrolls has a game captured such an unsettling sense of being alone in a hostile environment! Second one dropped the radiation ball, third one picked it back up again.

If you're excited about this then go watch and read The Walking Dead. It will satisfy and then raise your expectations of what a good end of the world (here: Zombies) scenario should be like.