The Reapers Are the Angels by Alden Bell

Twenty-five years after civilisation collapsed due to the appearance of the 'meatskins', a young woman named Temple has found solace living on an island off the south coast of Florida. When she finds a meatskin on the beach, she realises that her sanctuary is no longer secure and she strikes back north to the mainland. As she journeys through the former southern states of America, she finds herself a charge and a mission, but she also makes a remorseless enemy of someone who could have been an ally. 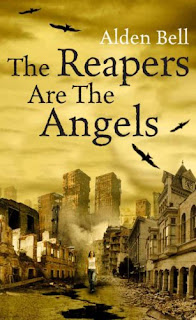 Alden Bell's second novel (but his first genre piece) is an intriguing book. It's a post-apocalyptic novel with zombies, but zombies who are almost incidental to the plot. The undead are presented as more of a nuisance than a major menace, only really dangerous in large numbers in contained areas, otherwise they can be outrun or out-maneuvered easily. Humanity has adapted to their presence and life continues, albeit at a different, more isolated pace.

With the zombies more of a background menace than an actual threat, the narrative focuses on Temple, a teenage girl who's grown up knowing nothing other than the world as it is. She is one of the first of a new generation of dispossessed, to whom avoiding meatskin packs and executing bitten friends is a way of life. This way of life on the road, contrasted with a more comfortable life in the sealed-off enclaves, engenders a certain amount of camaraderie and mutual respect between the wanderers. At the same time, there is plenty of scope for conflict, for rivalries and murderous grudges. This also gives the book something of the feel of a Western, with zombies standing in for hostile native tribes and where towns again represent outposts of light in a hostile wilderness (there's even a dangerous train journey through zombie-infested territory at one point which could have come out of a Western, zombies excepted of course). 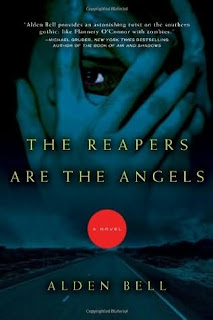 The focus of the story is the grudge between Temple and Moses Todd, another wanderer on the road with his own code of honour that he feels he must adhere to or lose himself. Temple is established through flashbacks and stories about her life that she tells others (some stories more reliable than others) and is a fully-rounded protagonist. Moses, whom we only meet in chapters from Temple's POV (which make almost all of the book), is well-established through dialogue and his actions as he pursues Temple relentlessly across the American South, and part of the tragedy of the novel is that these two characters could easily have been allies and comrades if events did not drive a wedge between them.

Bell's prose is rich, evocative and intelligent, a genuine pleasure to read, although an odd quirk is his decision not to use speech or quotation marks (or the use of a hyphen sometimes favoured by older writers). This results in bursts of confusion as it is sometimes unclear if we are reading Temple's thoughts, some description of passing scenery or actual dialogue between her and another character, and becomes mildly irritating at the book continues. Another issue is inconsistent levels of education in the characters: Temple knows how to drive and maintain a car and is aware of the principles of aerodynamic flight, but doesn't know how to read or write (a facet which adds nothing to her character but is purely a contrived situation to delay her decision on where to go next as she can't read the directions someone he written down).

The Reapers Are the Angels (****½) is a superior post-apocalyptic novel whose literary ambitions are intriguing and impressive, if not altogether successful. The novel is available now in the UK and USA.
Posted by Adam Whitehead at 09:50

Email ThisBlogThis!Share to TwitterShare to FacebookShare to Pinterest
Labels: alden bell, the reapers are the angels

I will pick this one up. I'm a zombie movie fan and would like to read more books since World War Z.

Thanks for the review!

I loved this book. I was also mildly put off by the lack of punctuation. Another irritation was convenient technology. In some areas where there should have been no way, things magically worked. I won't be specific to avoid even minor spoilers, but these situations took me out of the moment. All that said, I still loved the story and I loved Temple.

I really enjoyed this book and was also a little thrown by the lack of punctuation. However I found it didn't distract me too much and actually came to not notice it as the book wore on.

The ending did leave me a little "Oh...right?" but then I suppose in that situation a happy ending is out of the question.