Thirty years ago the Malazan Empire launched a devastating invasion of the island continent of Korelri. With the north-western approaches denied by the ferocious sea-dwelling creatures known as the Stormriders, the Malazans swung wide to the east and invaded the island of Fist, at the furthest edge of the archipelago. There, under the command of Greymane, a grinding war of attrition was fought across decades to no end, for the islands of Korelri are protected by a goddess known as the Blessed Lady. Her very presence inhibits the operation of Warren magic, the cornerstone of Imperial tactics. Eventually Greymane abandoned his post and the war effort faltered. 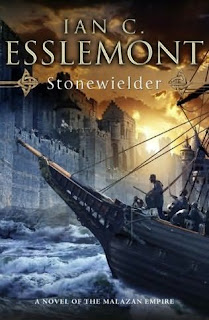 Now things are changing. In the wake of a devastating civil war on Quon Tali, a new Emperor sits the throne of Malaz, and he has determined that the time has come to take Korelri once and for all, despite the power of the goddess. A new invasion force is assembled, its task formidable but its soldiers keen. As war erupts once more, the stoic soldiers of the Stormwall keep to their task, holding the alien Riders back from their shores. Amongst them is a new champion, a warrior beyond compare, a soldier who cannot die...but his comrades are coming for him.

Stonewielder is the third novel by Ian Cameron Esslemont, the co-creator (along with Steve Erikson) of the world of the Malazan Book of the Fallen. Stonewielder takes place on that world, slotting into the timeline a few months after the events of Return of the Crimson Guard, roughly around the same time as Toll the Hounds. Familiarity with the Malazan novels is a major asset in reading this book, but only really Return of the Crimson Guard is needed to fully understand what is going on: several character and storylines begun in Return continue directly here. I also strongly recommend reading this novel before tackling Erikson's The Crippled God in a few months, as the ending of Stonewielder appears to be a direct set-up for that novel.

The island-continent/subcontinent (as we learn in the book, different governments and geographers argue as much as fans do about which it is) of Korel/Korelri/Fist (and we get another explanation why the place has so many names as well) has been discussed in hushed terms ever since Gardens of the Moon was published more than a decade ago, but curiously Korelri natives have been thin on the ground in the published novels and every character seems to have heard something different about what was going on there. Stonewielder clears all of this up, exposing secrets the Malazan Empire has been keeping about the place and the original invasion for some time. The first surprise is how small the place is: based on the map at the front of the book, it appears to be less than half the size of Quon Tali, itself a small landmass. Why hasn't the Malazan Empire outflanked and conquered it? As the book continues we learn why, and the frustrations of the Malazan high command become easier to understand.

Esslemont continues to develop and grow as a writer although, pleasingly, not in terms of word-count. Stonewielder is actually shorter than Return of the Crimson Guard and, whilst you'd never call a 620-pages-in-hardcover novel 'short', it's the shortest novel in the entire combined series bar only Night of Knives. At the same time it's as epic and vast as any of Erikson's novels, packing in a huge amount of story, major events and characters and still finding time for moments of comedy (Manask may now be my favourite Malazan comic character) and high tragedy. There's even some amusing metacommentary about fan discussions about the series: at one point two Malazan soldiers get into a discussion not about high philosophy, but about if the Malazans could beat the Seguleh in a stand-up fight, a discussion that feels like it's come right off the Malazanempire discussion boards.

Esslemont's characterisation is strong, stronger than his previous books, with characters like Suth (our resident new 'ordinary soldier' POV) set-up and well-motivated economically and skillfully, whilst Hiam, commander of the Stormwall, is an interesting character whose arc is full of pathos. Kyle, the callow youth soldier POV from Return of the Crimson Guard, has matured into a more interesting protagonist as well, whilst the Crimson Guard are more fully-rounded individuals this time, with better-established motivations. The action is also well-depicted, with both major land battles and naval engagements (featuring the occasionally-mentioned Moranth Blue doing some impressive things against the storied armada of Mare) showing that the Malazan Empire is still capable of kicking ass, even after its recent catastrophes.

On the weaker side of things, there is a lengthy subplot involving Kiska and a sojourn into the Warren of Shadow which is basically just set-up for future events (both in Esslemont's novels and possibly in The Crippled God and Erikson's planned Toblakai Trilogy as well). This section is well-written and features and the unexpected return of a fan-favourite character, but it lacks a defining climax.

Still, Stonewielder (****½) is both a gripping, bloat-free military fantasy which further illuminates and explores this intriguing world, and one of the strongest books in the series since the mighty Memories of Ice. The novel is available now in the UK and will be published in May 2011 in the USA.
Posted by Adam Whitehead at 13:16

Email ThisBlogThis!Share to TwitterShare to FacebookShare to Pinterest
Labels: ian cameron esslemont, stonewielder, the malazan book of the fallen

1. How much Iron Bars do we get in this book? He had only 3 scenes In RotCG, which was really frustrating since he was the only CG we really knew from before. Felt like Esslemont was teasing us with his few appearances, especially with that thrilling fight with the Seguleh.

2. Could you give us your ranking of the Malazan books from best to worst? It would be nice to know, So that one could compare .

Iron Bars is in the book a bit more than RotCG, but still not a vast amount. However, his presence on the Stormwall is the impetus for a number of other storylines.

From best to worst? Difficult and likely to change, but very roughly, with 1 as the best:

Thanks for the answers, to bad about Iron Bars, but at least now I won’t spend the entire book in anticipation of his meatier parts.

I have to say Memories of Ice is my absolute favorite book from the Malazan series, as well. I think it might be ranked up there with one of my all-time favorite books. That one gives me the chills. Toll the Hounds is good, but it's also kind of far down on my list as well.

Anyway, great review! I am starting to do my Malazan re-read (because I may or may not be insane). I am going to add in Esslemont's novels as I go. I'm excited. I have yet to read any of his stuff.

I'm actually very encouraged by your list as I have just begun my adventure into the Malazan series. I finished Night of Knives barely 2 weeks ago and really enjoyed it! Gardens of the Moon should be arriving any day now. :)

The question now is: do I actually attempt a Malazan re-read before this arrives on my doorstep in a few days?

The problem being that I read the first 7 Malaz books in 2007 so they're sort of still fresh in my memory, but now that i know so much more than I did it could also be fun to go back and re-read the entire series before Stonewielder and Crippled arrive. Argh! Decisions decisions...