Police officer Rick Grimes is wounded in a stand-off with a criminal and ends up in a coma for a month. Waking up, he finds the hospital abandoned, no staff in sight and a bunch of flesh-eating zombies walking around. Learning that the undead have risen and destroyed much of civilisation, he resolves to head for Atlanta in the hope of finding his wife and son. 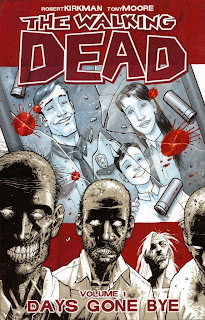 Over the past seven years, The Walking Dead has become one of the most popular comic series around, attracting critical acclaim, strong sales and a well-received television adaptation from Frank 'Shawshank' Darabont. Days Gone Bye collects the first six issues of the comic, forming an introduction to the series, the premise and the characters.

This is mostly scene-setting stuff, and features relatively little that will startle or surprise readers. Rick wakes up (in a virtually identical - but given the timing, coincidental - manner to the movie 28 Days Later, which in turn appears to have been inspired by Day of the Triffids), learns about the Zombie Apocalypse which, in fine tradition, goes completely unexplained, and sets out to find his missing family members, in the process learning more about the post-apocalypse world, how to fend off the zombies and so on and so forth. Once he finds shelter at a small camp of survivors outside of Atlanta, traditional leadership struggles emerge as the group tries to survive the zombies outside and intrigue within the camp.

There is little here which is really notable or transformative in the zombie genre, lacking say the different, documentary-style approach of Max Brooks's World War Z. What it does do is use the traditional zombie tropes to drive a familiar story and do it in an entertaining manner. The group of survivors is made up of various archetypes who are lacking in originality or notable depth, but there are some nice flourishes to the characters that makes them identifiable and interesting. Kirkman engages with cliche in many areas, but also backs off from it in others: his zombies can survive decapitation and Rick's hunt for his family could have been a long-running arc, but is in fact resolved very quickly.

Dialogue is often clunky and overburdened with exposition, but Tony Moore's artwork is effective. The black-and-white, sparse images intermittently get over a feeling of a dead or dying world, whilst his zombies are often more detailed and impressively-drawn than the living characters. This gives rise to the feeling that, rather than the zombies being the walking dead, it's actually the characters who are now devoid of life and purpose (backed up by the constant arguments through the second half over what the group should do next). This is an interesting idea and it'll be telling whether this is developed in future volumes.

Days Gone Bye (***) is a little too traditional and plays things too safe for a zombie epic, but clunkiness aside is an effective enough opener to make the reader try at least the second collection to see where the story goes next. It is available now in the UK and USA.
Posted by Adam Whitehead at 17:41

My favorite all time comic book, started reading it about 5 years ago or so. It will be interesting to see if you change your opinion on it as you go through the series. It’s the deepest comic I know of.

Sounds pretty cool! I've been looking for a new comic to get into. The last I really liked was "Too Much Coffee Man!"

made it through to about issue 60 something. There are pits and troughs in the series, some exceedingly startling incidents and some rather dull diversions.

As the story progresses, the zombies really take a back seat.

Think you'd be better off buying the large compendium though: http://amzn.to/i8owTD

I think give it time to grow on you. It does start off a bit generic, but then again, how else do you set up a Zombie apocalypse ;) ?

The comics do what a film like 28 Days Later does over any "Insert time or day" of the Dead films, and that is fully creating the loneliness and chaos amongst the survivors, and making us believe that they really are just barely getting by, rather than luckily kill all Zombies in their way.

The comics really become harder and harder to put down, and I found myself fighting back tears. And if you have time and some cash left over, invest in Y! The Last Man. That is a finished series and also excellent!

Y The Last Man is great too, the ending is really upsetting though :)