It is 1895. Ten years have passed since the Martian assault on Earth. The British Empire, 'back-engineering' recovered Martian technology, has conquered Mars with germ warfare and now treats with the denizens of Venus and Jupiter on an equal footing. A great spaceport has been built in London, a vast airship known as the Empress of Mars is touring the world and showing the British flag, and Venusian missionaries are now visiting Earth. With such wonders unfolding, showman Professor Coffin is finding interest in his pickled Martian specimen evaporating. When his zany (sorry, assistant) George Fox is informed that it his destiny to find the mythical Japanese Devil Fish Girl, Coffin sells his worldly possessions to fund an exciting and dangerous round-the-world trip to find his, sorry, their fame and fortune. 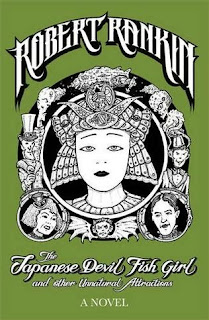 The Japanese Devil Fish Girl and Other Unnatural Attractions: A Novel by Robert Rankin is a humorous semi-sequel to The War of the Worlds and is, very blatantly, an attempt at a 'steampunk epic' (much is made of Rankin's status as the very first Fellow of the Victorian Steampunk Society). Rankin delights in tearing up the timeline, which doesn't mesh very well with either War of the Worlds (which takes place very late in the 19th Century, with references made to a book published in 1893, but here is retconned to 1885) or established history: Charles Babbage and Charles Darwin are both still around, despite having died decades earlier, whilst Adolf Hitler cameos as a young man despite only being six years old in real life at the time. Of course, one doesn't read Rankin for historical accuracy or serious attention to detail. His books are comical romps, sometimes with hints of more interesting things going on.

The Japanese Devil Fish Girl is certainly a fun romp, and a slightly stronger novel than his previous book that I'd read, The Hollow Chocolate Bunnies of the Apocalypse (though it isn't quite as funny). The structure is better, with George Fox's misadventures (to some degree episodic) on the Empress of Mars giving a spine to the story as misfortune befalls him, whilst with the redoubtable Professor Coffin Rankin gives us a more complex character than normal, although Fox is cut from the same cloth as just about every one of his other heroes, from Cornelius Murphy through Toy City's Jack. The pace is furious and it's unlikely you'll be bored, but there's also a lack of depth. In particularly, the shift from adventures in remote corners of the world back to London at the end of the novel is somewhat jarring.

On the humour front, Rankin trots out quite a few of the same running gags for inspection, and you'll either laugh or give a long-suffering sigh at them depending on your degree of familiarity with the author (luckily a minigun 'like the one Blaine had in Predator' fails to appear). There's a few funny other gags elsewhere and a couple of sharp jabs at British imperialism which seems to threaten (but never achieves) satire, but towards the end of the book Rankin falls back on a comical monkey and his exploits to get laughs, which hints a little at desperation (as does the blatantly sequel-baiting finale). Oddly for a Rankin novel, this is one where the actual story is better than the humour.

The Japanese Devil Fish Girli (***½) is pretty much Another Robert Rankin novel, although shorn of connections to his other books it's a little bit more accessible to newcomers. But there is definitely the feeling that here he had a chance to break free of his comfort zone and write a more interesting story using steampunk trappings, but didn't do it. Instead he does his normal thing and does it well. The book is available now in the UK and on import in the USA.
Posted by Adam Whitehead at 19:26

Email ThisBlogThis!Share to TwitterShare to FacebookShare to Pinterest
Labels: robert rankin, the japanese devil fish girl, the war of the worlds