Brandon Sanderson recently revealed (via Facebook) that he's been working on a Mistborn short story or novella during his break before beginning work on the final Wheel of Time novel in January. However, the book has gotten a bit bigger than originally planned and is now a short novel of approximately 60,000 words (maybe longer when finished). Tor have bought the book and will be publishing it in 2011, meaning that 2011 will not be Sanderson-less as previously thought. 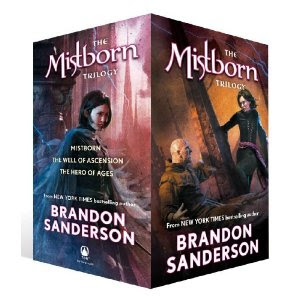 Interesting news. The new book will be set roughly halfway between the Mistborn trilogy and its planned sequel series, which will be set several centuries later when the people of Scadrial have achieved a level of technology similar to that of contemporary Earth, but with allomancy still in use. From the sound of it, the short story will be set at a time when firearms are in use, possibly a Wild West level of technology (apparently it features the 'best allomancy gunfight ever'). A release schedule or title for the book has not been announced yet.
Posted by Adam Whitehead at 21:10

I'm only halfway through the 1st series, but enjoying it a lot. Looking forward to this.

There's going to be three. The second trilogy will apparently be set when the tech levels on Scadrial are similar to our own world and the third will be an SF-fantasy hybrid set centuries after that.

OK, that's even more awesome than I first thought, I wish more fantasy series would go to the (logical) conclusion of ending in a sci-fi setting, though I can't honestly remember reading any like that. It's just an idea I really, really like.

I dont know about this. it could end up like the star wars prequals if done like shit.

I know brandon is trying to branch out and that's cool but really, some ideas are best left dead in the gutter.

I agree with anon1. stopped liking Sanderson after the douche ex machina ending of the hero of ages. not to spoil it but did it really have to revert to a 'religion will save the day' type of ending. I'm aware of Brandon's interest in religion but shoe-horning it into what would have proven a much better ending without that.
really doubt that the second trilogy is going to be any good.

it wasn't religion that saved the day. It was the use of information that all those religions compiled. I thought it was a brilliant touch. It shouldn't be ridiculed just because it's associated with religion.

YAY!!! I can't wait! I absolutely love the Misborn world! I want the first copy!