Pointless BUFFY THE VAMPIRE SLAYER reboot on the way

This possibility was first raised a few months ago but was dismissed by many for being too lame to work. Unfortunately, it is true: Buffy the Vampire Slayer is being rebooted for a new feature film without the involvement of the original creator, Joss Whedon, or any of the established cast. 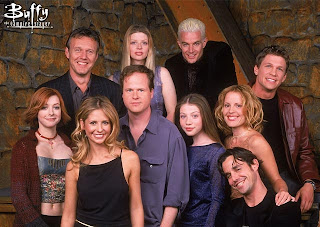 "No, go on, a Buffy remake? You're kidding, right?"
Buffy started life as a moderately-successful movie in 1992, although Whedon was unhappy with his original script being massively rewritten. A few years later he got the chance to revisit the premise as an ongoing TV show. Buffy the Vampire Slayer ran for seven seasons between 1997 and 2003 and spawned a spin-off show, Angel, which ran for five seasons from 1999 to 2004. Many successful books and comics have followed and the two shows launched (or relaunched) the careers of many successful actors, such as Anthony Stewart Head (now playing Uther in Merlin), Amber Benson (now a successful urban fantasy author), James Marsters (who has had recurring roles on both Torchwood and Caprica) and David Boreanaz (now one of the biggest actors in American television due to his role on Bones).

The reasons for the reboot, especially only six years after the Buffyverse last appeared on-screen, appear to be limited to just the success of Twilight and True Blood, with the rights-holders wanting to get back in on the action now that vampires are huge again. The response from the fanbase, Joss Whedon and David Boreanaz has been predictably negative.

"I always hoped that Buffy would live on even after my death. But, you know, AFTER. I don't love the idea of my creation in other hands, but I'm also well aware that many more hands than mine went into making that show what it was. And there is no legal grounds for doing anything other than sighing audibly. I can't wish people who are passionate about my little myth ill. I can, however, take this time to announce that I'm making a Batman movie. Because there's a franchise that truly needs updating. So look for The Dark Knight Rises Way Earlier Than That Other One And Also More Cheaply And In Toronto, rebooting into a theater near you." - Joss Whedon

Look for this needless movie in 2012, although with no director attached yet this could be rather optimistic on the part of the producers.
Posted by Adam Whitehead at 09:58

I really scares me how everything being made today are reboots. Will this generation have no stories of their own?

I know people go to these movies but they always leave complaining. To make it worse, they often go into it knowing they will not like it. Which makes no sense to me. I would think that they would not want to give money to the people ruining the TV shows/movies they grew up with.

As long as they don't get Megan Fox as Buffy...

Slashfilm says that this reboot attempt is entirely separate to the one that was reported last year:

Note that this is a different reboot project than the one Fran Rubel Kuzui was developing in 2009. Warner Bros and Atlas picked up the rights from Vertigo Entertainment, the company that was pushing forward with a new film at that time.