In the UK a popular quiz show called The Million Pound Drop is currently airing. The show has an interesting premise, namely that the contestants start off with £1 million and have to physically place the money on hatches with the potential answers to the questions displayed on them. If they are wrong, the hatch opens and the money disappears down it. They can split the money between multiple answers, but always have to leave one answer blank. The increasing difficulty of the questions across different categories makes winning the full £1 million exceedingly unlikely. The show's website allows people at home to play alongside the in-studio contestants and it makes full use of Twitter and Facebook to involve people in the game, and an inevitable American version will air in December on Fox. 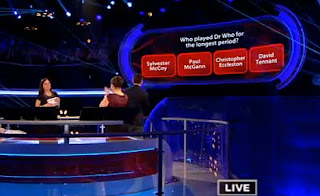 However, the gameshow ran into problems last Friday when a Doctor Who question was raised. The question asked, "Who played Dr. Who for the longest period?" and then gave Sylvester McCoy, Paul McGann, Christopher Ecclestone and David Tennant as the four possible answers. The couple divided their remaining money (£650,000) between McCoy and McGann only to be told the 'correct' answer was David Tennant, and as a result lost their money.

Doctor Who fans pointed out, in significant numbers, that this answer was itself in error. Of the actors involved, David Tennant played the role from June 2005 (when he appeared at the end of the first season since the show's return) to New Year's Day 2010 (when he regenerated into Matt Smith), totalling about five and a half years. Whilst Sylvester McCoy played the Seventh Doctor only for three seasons in 1987-1989, slightly more than two years, he reappeared in the role in a 1993 charity special and then in the opening scenes of the 1996 television movie (in which he regenerates into Paul McGann), putting his total period in the role on television between first and last appearances at about nine years. Some fans also pointed out that the question failed to specify 'played the role on television', and as McCoy has also appeared in audio plays produced by the company Big Finish (most recently this year, twenty-three years after his first appearance), this puts him inarguably in the lead.

The producers of The Million Pound Drop agreed that the answer was incorrect and has amended it, reinstating the contestants' winnings of £325,000. They will return to the programme this Friday to resume their game with a full apology from the producers. Hopefully they won't lose all the remaining money on the first question back.
Posted by Adam Whitehead at 22:39

Email ThisBlogThis!Share to TwitterShare to FacebookShare to Pinterest
Labels: doctor who, news