The planet Tartarus has come under heavy attack by the Orks, hard-pressing the planet's Imperial Guard defenders. The Blood Ravens chapter of Space Marines arrives to reinforce the planet and carry the fight to the Ork forces, but with both the Eldar and Chaos Marines also playing a role in events on the planet, it is clear that more is going on behind the scenes... 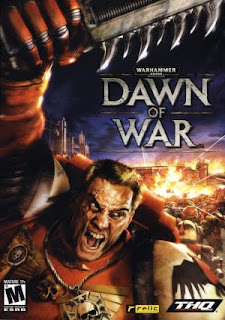 Released in 2004, Dawn of War was the first truly successful Warhammer 40,000 computer game. A real-time strategy game created by Relic, the team behind the excellent Homeworld series of strategy games, it was responsible for widening the appeal of WH40K in the United States and for also reinvigorating the RTS genre at a time when it was becoming moribund. The game spawned three expansions (Winter Assault, Dark Crusade and Soulstorm) and a sequel, Dawn of War II.

Dawn of War is a frustrating game. On the one hand it's straightforward to play, a lot of fun and does a good job of getting the WH40K universe (a place where the fascist, dictatorial and rather unpleasant Imperium of Man is presented as the 'good' side only because everyone else is so much worse) working in another medium to the wargames and novels. On the other hand, it's often slow to get going, dubiously plays fast and loose with the spirit of the setting, has an enormous (and never-addressed, despite numerous sequels) cliffhanger and, on both the strategic and tactical sides, is rather lacking.

Unlike its sequel, which adopted an RPG/RTS hybrid approach, Dawn of War is a straight-up RTS. You build a base, you build armies, you send them out to conquer. Dawn of War's innovation (which actually a few games had done earlier, but DoW popularised it) was that there was no resource-gathering. Instead you hold strategic points on the map. The more you hold, the more resources (requisition points) you get which can be used to summon reinforcements from your orbital warship, the Litany of Fury. Obviously the enemy makes it a priority to retake strategic points to slow your expansion. For this reason each strategic point can be fortified and defended with auto-cannons, allowing your troops to move on to the next target. Unfortunately, the time taken to fortify a strategic point is significant, meaning that turtling players may find even the smaller maps taking hours to complete as they crawl from point to point. More aggressive players who prefer to take points and move on may find themselves having to frustratingly double-back every few minutes to retake captured points. It has to be said that the strategic point system in Dawn of War is not implemented as well as it is in Company of Heroes, the WWII game that uses the same engine (a recurring problem, although obviously not at the time of release).

The other problem is in the depiction of the Space Marines themselves. In the WH40K setting Space Marines are insanely tough ten-foot-tall super-warriors clad in power armour. One Space Marine is equal to several dozen of the ordinary human Imperial Guard or Orks, and can trounce most enemies without breaking a sweat. Dawn of War treats them pretty much as ordinary grunts. They die fairly easily (if not quite as easily as Imperial Guard, Chaos Cultists or basic Orks) and their weapons seem dramatically underpowered compared to most other depictions of them in fiction. However, the ability to reinforce them in the field with new troops and upgraded weapons and armour also, conversely, eventually renders them almost unbeatable, especially in numbers. Each level is therefore a fight for time as your initially vulnerable Space Marines expand across the map cautiously whilst you upgrade them, followed by a storming final assault on the mission objective. Once you get Terminator Marines and upgraded Predator Tanks on the last few missions, you are essentially invulnerable, resulting in a game that bizarrely gets easier as it goes along. You can actually use the standard Space Marines throughout and still win fairly straightforwardly, which makes researching or building new, more powerful units (one of the main appeals of many RTS games) redundant.

On the plus side the graphic design is cool and the level of detail in the units and in combat (with many units having unique combat animations when they fight one another) is still very impressive six years on. And whilst the game is far too easy and too short (only 11 missions and one playable faction in single-player, which is anaemic even by Relic's infamously thrifty standards), there's still a fair amount of fun to be had, especially when you factor in skirmish, multiplayer and the expansions. The story is okay, if uninspired, and the writing and voice-overs are well-handled, especially since the game doesn't entirely take itself seriously (especially with the Orks), although some of the po-faced Space Marine characters get a bit boring after a while.

Dawn of War (***) is an entertaining and time-passing RTS game but lacks the immense tactical depth of its successor, Company of Heroes, and also fails to adjust the genre's limitations to depict the WH40K factions more accurately (as its sequel does). The result is a game that is okay, but not a genre classic. It is available now in the 'complete edition' with its three expansions in the UK. Oddly, this edition no longer appears to be available in the USA, only the omnibus edition with the game and the first two expansions.
Posted by Adam Whitehead at 00:28

I agree with your summary. It was a fun if fairly short/shallow dip into the material.

Not so sure about the criticism of the space marines. The books and associated bamf tend to overstate their prowess, if you ask me.

In the actual tabletop game, the space marines are about the same height and build as other humans and their stats are only a little better... certainly not a match for dozens of orks.

The fluff Space Marines have always been overpowered compared to how they perform on the tabletop. I remember once White Dwarf published an army list for "movie Marines", which had points values such that you could fill an entire army with just ten men.