Towers of Midnight by Robert Jordan and Brandon Sanderson

The Last Battle has begun. From Saldaea to Shienar, vast armies of Shadowspawn burst forth into the unprepared Borderlands. Whilst Rodel Ituralde prepares to stand siege against overwhelming numbers, Lan Mandragoran rides for Tarwin's Gap with the last of the Malkieri at his side.

The Dragon Reborn has overcome the darkness that was threatening to swallow him but now faces a struggle to repair the damage his actions have unleashed. Arad Doman is starving, the Borderlander army at Far Madding must be confronted and Cairhien remains without a ruler. But before Rand can address those problems, he must stand within the Hall of the Tower and answer for his actions to the Amyrlin Seat... 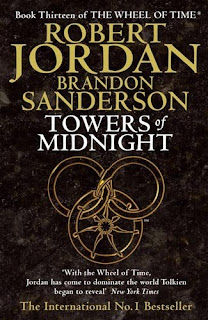 Perrin Aybara and Mat Cauthon have their own challenges to face. Perrin must make peace with his wolf side and forge a dangerous alliance with those who only want to kill him for crimes from long ago. Mat must face his own nemesis on the streets of Caemlyn and undertake a desperate quest to rescue an old friend, but the price will be high. And, in the Aiel Waste, Aviendha must journey into Rhuidean and confront a terrible truth that could shatter the Aiel more completely than Rand al'Thor's revelations.

Towers of Midnight is, at last (and third time lucky) the penultimate volume of The Wheel of Time. The fourteenth and final book, A Memory of Light, will be published in early 2012. Towers is published just short of the twenty-first anniversary of the series, which is appropriate as this is where the series finally matures and comes of age. Lots of the more irritating quirks of the series, such as the inability of the major characters to, you know, talk to one another about what's going on, are absent from this novel as fresh alliances are forged, plans are laid and armies are readied for the grand finale.

Just as Rand al'Thor has decided that he must sweep away the rubble of the Bore before he can confront the Dark One, Towers of Midnight sweeps aside many storylines and side-characters in preparation for the grand finale. The pace of the novel is relentless as we drive towards the moment when the Last Battle must be unleashed in its full fury, with each chapter seemingly ticking off character and story arcs stretching back all the way to The Eye of the World. Many characters who first appeared in that book, including relatively minor ones like Dain Bornhald and Morgase Trakand, have important roles to play here, giving the feeling of a vast circle slowly being closed off. There are also strong ties to The Shadow Rising, with the Aiel playing a larger role in events then they have for a while and a revisiting of Rhuidean and its glass columns providing a late-series game-changing moment that was wholly unexpected but quite satisfying.

Thematically, Towers cannot hope to match The Gathering Storm's tight focus on Rand and Egwene and their respective journeys through chaos and fire and out the other side. This book is far more epic and sprawling, with many more storylines and characters visited and progressed. However, Sanderson manages to maintain a strong focus on getting the original major characters back into the thick of the action, this time with Perrin and Mat. There's also an interesting dramatic device used where Lan's march across the Borderlands towards Tarwin's Gap serves as a countdown to the moment when all hell truly breaks loose, which helps the book achieve its oppressive feeling of events moving towards a final, chaotic doom.

In terms of the writing, Sanderson continues to do a fine job of integrating his and Robert Jordan's styles, although Sanderson's 'voice' is a little bit more noticeable here (Towers apparently has far less of Jordan's finished text than the other two books). Fortunately, his grasp of Jordan's characters is more assured than before, with the major weak link (Mat) coming across far more like he did in earlier books. Of the characters prominent in this novel, he only really struggles with Berelain, hardly the most vital of characters anyway, whilst he gets the likes of Perrin, Elayne and Birgitte spot-on (for example, Elayne continues to make wince-inducingly stupid mistakes and not really learn from them). In fact, Sanderson achieves the near-impossible here of making Faile actually quasi-likable for a few chapters, which may be his most towering achievement in writing these concluding volumes so far. 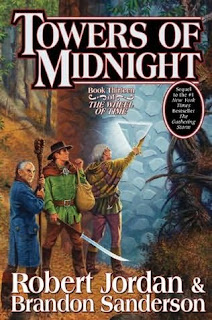 Elsewhere, problems remain. The formal agreement between two armies to do battle at a given place on a given time feels very odd and doesn't ring true. Whilst the pace is mostly furious, there's possibly a couple too many chapters and scenes where people sit around and talk about the plot rather than getting on with business, although these are less noticeable than they have been in the past. There's also, to this reader's frustration, the fact that this is the seventh book in a row where Perrin and his forces are messing around in the Altaran/Ghealdanin backwoods (a story which, thankfully, finally and definitively ends here) rather than doing anything that's actually interesting. Fortunately Sanderson even rescues this storyline, taking advantage of the longueur to conclude Perrin's 'wolfbrother' arc. However, I suspect there will be complaints that both the Seanchan and Black Tower storylines are only barely touched on here, rather than being explored more thoroughly. As it stands, it is dubious that Sanderson can bring those two storylines into play and conclude them satisfyingly with only a (relatively) small number of chapters remaining, but we will see.

Many events unfold that people have been expecting for years (and yes, we learn the answer to a long-standing but utterly irrelevant mystery that Wheel of Time fans have furiously debated for over a decade), but Jordan's plotting skills and Sanderson's writing means that there are still plenty of big surprises to come, some of them almost strokes of genius in how they were set up beforehand.

Towers of Midnight (****½) clears the decks of a lot of dead wood and brings us almost to the end. Some minor issues mar what could have been the best book of the series, but there is nevertheless the feeling that we have been set up for a huge finale. Time will tell if Sanderson can deliver on that. The novel is available now in the UK and USA.
Posted by Adam Whitehead at 11:21

Thanks for the great review! I noticed when reading your review and Pat's review from the Hotlist, that you mention that the pace of the novel is actually relentless, whereas Pat mentions the novel really picks up in the last third.

When comparing it to the pace of TGS, how do you think the novel fares?

I got the impression from reading your review that ToM is basically cleaning up most of the garbage that was leftover, before heading into the final battle. Do you think that's fair to say?

Fortunately, his grasp of Jordan's characters is more assured than before, with the major weak link (Mat) coming across far more like he did in earlier books.

Was Mat's internal monologue always as annoying as it was in this book? Yes Mat, we get that women are trouble and you're a "married man" - no need to beat us over the head with that fifty times in a single chapter. Maybe it's been too long since I last read the earlier books.

Aside from that, most of the book was pretty good. I agree that Faile was vastly improved.

I don't think the pace really picks up radically in the last third. There's actually several major moments in the first two-thirds (I'm thinking of a major showdown between Mat and an enemy in particular) which are quite large climaxes, including several huge battle sequences. The last third isn't that radically different until the final cliffhanger chapter. For that reason I found the pace much more measured throughout, though still quite intense compared to previous books in the series.

I wouldn't say ToM was cleaning up the garbage. Something that was very impressive in both books was how much of the 'irrelevant sideplots' people had been moaning about for years turned out to be vitally important to the story, and that's the case here. Sanderson does get the timeline seriously tangled up though, with the effect that Tam al'Thor appears to be in two places simultaneously which is very bemusing until it straightens itself out.

I thought Mat's constant "I'm looking, but not really looking, well I'm looking but for someone else cause I'm a married man" internals were hilarious. Yes, it happens frequently, but anytime Mat was previously around women he always commented on them. Now it's not just "barmaid over there has a cute butt. gimme some beer" it's become "barmaid over there has a cute butt, not that i'm looking, talmanes needs a woman, i'm looking for him". His internal monologue just got longer because of how he's coming to grips with being a married man.

Most folks seem to love Mat, but have found him annoying lately. My fiancee has thought him annoying since book 1 and she's on 6 right now. I think she'll actually like him more in this book.