Daniel Abraham and Ty Franck (writing as S.A. Corey) are releasing a major space opera novel, Leviathan Wakes, Book I of The Expanse, in May 2011 through Orbit in both the UK and USA. This is already one of my most eagerly-awaited novels of 2011, and the excellent cover art is just the icing on the cake. 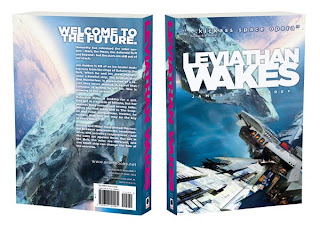 Orbit have a blog post about the book's artwork and font design. They also have some immense wallpapers of the cover art, which are very impressive.

"Welcome to the future. Humanity has colonized the solar system – Mars, the Moon, the Asteroid Belt and beyond – but the stars are still out of our reach.

Jim Holden is XO of an ice hauler making runs from the rings of Saturn to the Belt. When he and his crew stumble upon a derelict ship, The Scopuli, they find themselves in possession of a secret they never wanted. A secret that someone is willing to kill for. War is brewing in the system.

Detective Miller is looking for a girl. One girl in a system of billions, but her parents have money and money talks. When the trail leads him to The Scopuli and rebel sympathizer, Holden, he realizes that this girl may be the key to everything.

Holden and Miller must thread the needle between governments, revolutionaries, and secretive corporations – and the odds are against them. But out in the Belt, the rules are different, and one small ship can change the fate of the universe."

Sounds just like my cup of tea.
Posted by Adam Whitehead at 21:23

This sounds like the kind of SF that I always wished I could write. I'm definitely looking forward to this.

This sounds like so much fun, I'm all giddy. Congrats to Orbit's Marketing department, they sure managed to hook me.

Sounds a lot like the Quiet War by Paul J McAuley and what Alastair Reynolds is writing right now, which seems to be a little bit more real and what I would like to be reading. And with it coming from Orbit makes one of my favorite publishers even better.

Just how many pen names does Daniel Abraham have anyway? And is that even his real name?

I also have to say, this sounds like my kind of book. I have read all of Alastair Reynolds. It does not sound like a Reynolds (the only that comes near would be The Prefect).

I am looking forward to this book. I have read and enjoyed his Long Price Quartet very much, so I am interested in seeing how he does Space Opera.

The plot sounds interesting, I also like the fact that it seems to be a solar system centered sci-fi.

Could anyone recomend something in a similar vein? I'm tired of sci-fi books being centered around hundreds of weird aliens races, faster then light traveling, and humanity having spread all over the universe...