WARNING: SPOILERS FOR THE NOVEL A GAME OF THRONES AND THE TV SERIES.
HBO have released the third teaser trailer for Game of Thrones. At a minute, this is the longest teaser yet and features a lot more material. 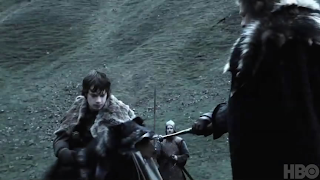 Theon hands Eddard his sword.
The trailer opens with material from the first Bran chapter in the book. Bran Stark (Isaac Hempstead-Wright) watches as his father Eddard Stark (Sean Bean), Lord of the North, executes Will (Bronson Webb), a 'deserter' from the Night's Watch. Eddard then tells Bran about his philosophy that if you sentence a man to die, you must swing the sword yourself rather than letting others do it for you (readers of the book know this sets up a future disagreement between Eddard and Robert). Notable in this scene is that Theon Greyjoy (Alfie Allen) now his his proper black hair from the books, as compared to Alfie's natural blonde hair. He now looks a lot more like the character from the novels. We then have a voice-over from Old Nan (Margaret John): 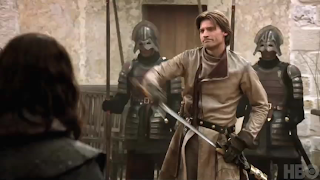 In a very nice juxtaposition, King Robert Baratheon (Mark Addy, with a gruff voice) then declares that there's a war coming (eagle-eyed viewers may spot Maester Luwin, Donald Sumpter, in the next shot of Eddard) before the scene shifts to the Crossroads Inn when Catelyn rouses a number of Riverlands soldiers to arrest Tyrion, which of course in the book triggers the outbreak of hostilities.

We then see Doreah (Roxanne McKee) 'tutoring' Daenerys in the bed arts so she may please her husband (something not in the books, although alluded to), followed by shots of armoured men with torches in the woods. This is probably either the Battle of the Whispering Woods or the search for Arya (Maisie Williams) triggered by her brief disappearance on the journey south.

Then we have an exchange between Cersei Lannister (Lena Headey) and Eddard, with Cersei in her 'charming' mode telling Eddard that he was trained to follow, but Eddard robustly responds that he was trained to kill (cut to a shot of him cutting down a Lannister guardsman). This may be a reference to the fact that Eddard, as his father's second son, was never expected to lead, only to follow his brother Brandon's commands. Intriguingly, there's a brief shot of Jon Snow (Kit Harington) at this point. Either just a random choice, or a nod to the fact that Jon, as Eddard's bastard son, is not expected to lead or rule either, only to do honour in House Stark's name whilst not being allowed to use that name. 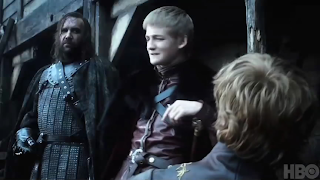 Tyrion gives his nephew some much-needed discipline.
We then cut to Winterfell and one of the more satisfying moments from the books, with Sandor Clegane (Rory McCann) watching as Tyrion 'chastises' his nephew Prince Joffrey (Jack Gleeson) with a slap to the face. We then get a brief glimpse of the clash between Sandor Clegane and his brother Gregor (Conan Stevens) on the tourney field, Tyrion enjoying the attentions of a prostitute called Ros (Esme Bianco) and Jon engaging with some vigorous 'training' with his fellow Night's Watch members. This is followed by Eddard Stark's characteristic, "Winter is Coming," and a rather uncharacteristic laugh. 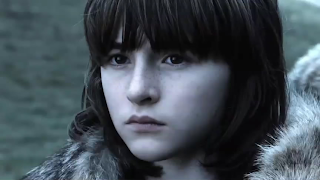 Bran Stark watching a man die.
Overall, pretty good. This trailer shows they are using different colour palettes for the different areas where the action is taking place. There are also some differences from the books highlighted: Will is being executed instead of Gared, the fight between Eddard and Jaime takes place in daylight and on foot rather than at night on horseback and Robert seems to be worrying about a new war, something he doesn't do in the book (unless it's Robert's paranoia over Dany's wedding to Drogo, which informs a lot of his actions in the novel). Drogo also has a beard rather than an elaborate mustache and it's clear that they're not giving the Targaryens purple eyes (although this may be down to screen-testing them and finding they didn't look good, apparently also why the Kingsguard armour is now gold with white trim rather than straight white).

You can find annotated screencaps here.
Posted by Adam Whitehead at 18:32

Hmm, I wonder why they chose to execute Will instead of Gared, as Will dies by the hand of the Others in the book and Gared is the only one that escapes that encounter.

Strange that Eddard and Jaime's fight is on foot. Didn't Eddard break his leg while falling off his horse? At least that is how I remember it.

If so, I wonder how they will adapt his injury for the screenplay.