Wertzone Classics: The War of the Worlds by H.G. Wells

The War of the Worlds requires little introduction. Originally published in 1898, it is one of the taproot texts of the science fiction genre, the father of all the alien invasion stories that have come along since. It was written during H.G. Wells's most astonishingly inventive and prolific period (1895-1901) in which time he also created or explored the fields of genetic engineering (The Island of Doctor Moreau), time travel (The Time Machine and, arguably, When the Sleeper Wakes) and interplanetary exploration (The First Men in the Moon), arguably the most important, and certainly one of the most impressive, sustained period of creative enterprise in the history of the genre. It's also arguably Wells's most popular and influential novel, remade, re-envisaged and adapted for other mediums many times over the past century. 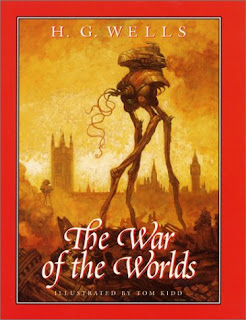 The book is told mostly from the first-person viewpoint of an unnamed narrator, a philosophical writer who relates his tale matter-of-factly, possibly for a book or newspaper report (the narrator seems annoyed by other accounts of the war between the worlds and has apparently decided to set the record straight). He relates how a giant cylinder, fired from the surface of Mars, lands near his house and disgorges several alien war machines which move on three legs. The Martians are unrelentingly hostile, using a powerful 'heat ray' to destroy the military forces the British government deploys against them and harvesting humans for their blood. More cylinders and tripods arrive and southern England is overrun, sparking a massive exodus from London and the surrounding towns. The British army and navy attempt a counter-attack, managing to destroy several tripods with the use of artillery, explosives and warships, but the Martians resort to using gas warfare to clear areas ahead of their advance, ending organised resistance. In addition an alien weed takes root and begins overwhelming local wildlife and fauna.

For a book with the title of The War of the Worlds, relatively little of the war is shown, especially after the first half (in which most of the military action is related second-hand by the narrator's brother, who is attempting to escape from London by boat to the continent). In the second half, the narrator tries to make his way to Leatherhead to rendezvous with his wife, but finds himself caught near the centre of Martian-occupied territory, with alien activity too high to move about safely. He takes refuge initially with a clergyman who has been driven mad by the stress of the invasion, and later with an artilleryman who entertains fanciful visions of a worldwide resistance to the occupiers and using the Martians' own weapons against them, but is far too lazy to do any work towards this end himself.

I tried to read The War of the Worlds as a youngster and didn't get very far, possibly because the novel didn't have the requisite number of explosions and laser blasts I'd been expecting (I was about seven or eight the first time I saw the impressive 1953 movie and had been expecting something more along those lines). Rereading the book now is a revelation: this is really impressive writing and feels as fresh and vibrant now as a hundred years ago. Wells is way ahead of his time here, with his depiction of interstellar travel (albeit by being fired through space by a giant cannon), gas warfare, the placing of civilians on the front lines and an early form of a laser, but on the human level he is pitiless in exposing the foibles of his characters. The narrator is a thinker who is often paralysed by fear in the face of the Martian threat, to the point where his observations are sometimes unreliable (one moment apparently suggesting the Martians attacked England as it's the heart of the greatest empire in the world, the next suggesting that the Martians see humans as ants and take no interest in how they are organised). The artilleryman has grandiose visions but lacks the ability to translate them into action, whilst the curator's inability to reconcile his faith that God will save mankind with the mass slaughter unleashed by the aliens drives him insane. Overall the theme of The War of the Worlds appears to be nihilistic: humanity can score minor victories but the technical gulf between them and the Martians is so vast that victory is an unrealistic prospect. 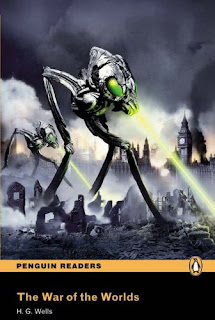 The defeat of the Martians is something that has been criticised over the years for being anti-climatic, but in context it feels appropriate. At the time the science of microbiology and germs was relatively new and exciting, and the idea that the Martians (as a product of their sterile environment) might have no experience with germs and thus no defences against them is reasonable. It also highlights Wells's suggestion that the war between the two races is Darwinian: the Martians have superior intelligence and weapons but their lack of adaptation to the environment of Earth eventually destroys them. Not just humanity but the entire biosphere rejects them. Of course, this has been misinterpreted over the years, notably through a religious prism, particularly in the 1953 film which cheesily ends with people gathering together in a church and praying for a miraculous deliverance and then being granted it. But Wells's take is more mundane: humanity is lucky and has spent millions of years evolving and adapting to the biosphere to the point where it can survive and the Martians cannot, and nothing more than that.

Criticisms are few. The book's focus is perhaps weakened a little by the lengthy pause in the narrator's story as we follow his brother's tale, but this also allows us a glimpse of the wider scope of the war (and, in the case of HMS Thunder Child's famous duel with two Martian tripods, gives humanity a rare victory), but that's about it.

The War of the Worlds (*****) is a short, dark and haunting story of war, death and hopelessness, where victory only comes from sources outside of the control of the characters. Powerfully written and rich in atmosphere, it remains the finest novel of alien invasion ever published. There are many different editions available in the UK and USA.
Posted by Adam Whitehead at 15:41

Email ThisBlogThis!Share to TwitterShare to FacebookShare to Pinterest
Labels: h.g. wells, the war of the worlds, wertzone classics

This is a classic book - I'm 53 and can honestly say that HG Wells set me up to enjoy sci-fi for the rest of my life, much as CS Lewis did for fantasy. I can't not comment....
Of course the Jeff Wayne musical version and the Rod Taylor movie were fine spin-offs (unlike the dire Spielberg mmovie).

Hey Wert - I love this book and this is a great review, but once again you used anti-climatic (no weather) instead of anti-climactic (disappointing ending), just thought I'd be a pedant and let you know.

Wert,excellent review as always! My experience was the same as Davieboy's: read this book as a young teenager and was set for life as an SF fan. My only regret is that no movie ever shows the naval battle you refer to. I know I was totaly "pumped" when HMS Thunderchild took on the two TriPods to save the other ships...

The War of the Worlds also points to colonial conflicts, a geopolitical condition that set the stage for two world wars in the next century. I read the burial of the pods ahead of the conflict as the attempt to influence colonial culture and the slow escalation of influence on a region.