Welcome to King's Landing: Malta and its use in HBO's GAME OF THRONES

In A Song of Ice and Fire a principal focus of the action is the Red Keep, the castle-fortress towering over the city of King's Landing, the capital of Westeros. A great deal of the political machinations of the series take place there. For the HBO series Game of Thrones, the producers faced the challenge of realising the pivotal location on-screen in a convincing manner. 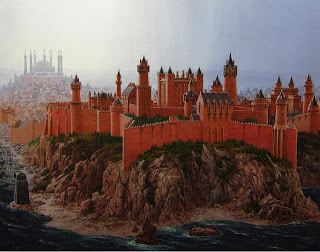 The Red Keep of King's Landing, overlooking Blackwater Bay with the Great Sept of Baelor visible in the mists to the west.
Much of the Red Keep, of course, exists only in the series soundstages in the Paint Hall studio complex in Belfast, Northern Ireland. A lot of the rest will be created or added digitally in post-production. However, to sell the location a towering gatehouse and some large stretches of wall were required. For this purpose, the production team had to look to using a real castle. 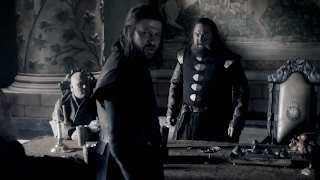 One of the Red Keep sets, in this case the small council chamber where Eddard Stark (Sean Bean) has a stormy meeting with King Robert Baratheon (Mark Addy) whilst the spymaster, Varys (Conleth Hill), looks on.
With the production having agreed to film scenes involving Daenerys Targaryen on the Mediterranean island of Malta (moving from Morocco, where her scenes in the pilot were filmed), the decision was also made to take advantage of Malta's significant amount of ancient towns and castles to film scenes set in Westeros as well. The town of Mdina was used for filming scenes on the streets of King's Landing and it was decided to employ the old castle of Fort Ricasoli to stand in for parts of the Red Keep, most notably the gatehouse. 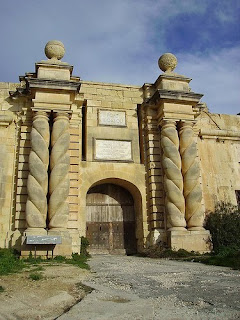 The entrance gate to Fort Ricasoli, Malta.
Fort Ricasoli was constructed by the Knights Hospitaller in 1670, though work on the fortress has continued on and off ever since, with additional fortifications and defences added in WWII (when Malta was bombed by the Luftwaffe and effectively besieged for two and a half years, but never invaded). The fortress has been used several times in films, with Gladiator and Troy most recently making use of it to stand in for parts of Rome and Troy, respectively. Interesting to see if they physically alter the wall colour or adjust it digitally in post. 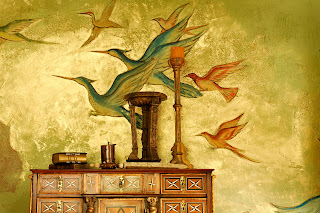 A mural on the wall of the chamber of the King's Hand.
Malta is already a popular tourist destination for European holidaymakers. Interesting to see if the island benefits from any boom in tourism from ASoIaF fans on the look-out for their favourite locations from the TV series.

In addition to the Red Keep and the streets of King's Landing, the island is being used to represent other locations in the series. A pivotal scene on the steps of the Great Sept of Baelor was filmed there recently, suggesting that one of the island's many large churches is standing in for that building. An offshore rock formation known as the Azure Window at Dwerja also provided a dramatic backdrop for the re-filmed marriage scene between Daenerys and Khal Drogo, whilst the village of Manikata stood in for a Lhazareen village sacked by Drogo's khalasar.

If Season 2 (which will be based on the second novel, A Clash of Kings) is commissioned, we'll likely be seeing a lot more of the island on-screen, as much of the book is set in King's Landing as it braces for war.
Posted by Adam Whitehead at 19:43

Yay. You got to be on io9. I wonder how it impacts your traffic. Maybe your next post should make use of that and advertise your favourite subject to masses ;)

Malta is a nice choice. It is in EU, has nice weather, English is an official language and it hasn't been used too often so we haven't been overexposed to its castles.

I get huge boosts from io9 links, far larger than anything else (even the couple of times that Joe Abercrombie and GRRM have linked to me).