Fleeing from New Crobuzon for reasons she prefers to keep to herself, Bellis Coldwine is heading for Nova Esperium, a colony located thousands of miles away across the Swollen Ocean, to lay low. Unfortunately, her ship is intercepted by the enigmatic pirates of the floating city of Armada and she is pressganged into Armada's service...as a librarian. 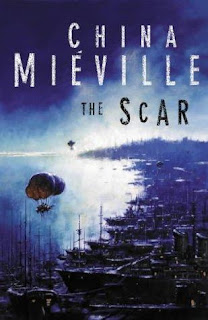 Armada is a city like no other, even on the baroque and weird world of Bas-Lag. Ruled over by the passion-fuelled Lovers, defended by Uther Doul and his unique sword, funded by piracy across half a dozen seas, Armada is a city of boats and decks and intrigue. But after centuries of wandering, Armada now has a mission and a purpose: to chain a creature of myth and to use it to find an ancient and great treasure. In the process Bellis will visit the island of the mosquito-women, will uncover a vast threat to New Crobuzon itself and be used and become an important chess-piece in the struggle for supremacy in the floating city.

China Mieville has written many good novels over the years, books which combine fine prose with wonderfully strange ideas, but often the elements of his books are out of balance. Perdido Street Station, for example, features wonderful worldbuilding and powerfully effective prose, but the actual story is somewhat mundane and the book overlong. The City and the City has a clever story and efficient, stripped-back writing but the premise doesn't convince (or at least the reactions of the outside world to it). Un Lun Dun is brilliant fun but lacks the darkness that lies at the heart of much of Mieville's work. And so forth. 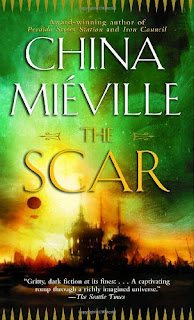 The Scar, on the other hand, has all of Mieville's strengths working in tandem with one another. The world is vivid, the story engrossing, the writing intelligent but also compulsively page-turning, whilst the book has arguably Mieville's finest collection of characters.
Breaking free from the metropolis of New Crobuzon (which was fairly well-explored in Perdido Street Station), The Scar takes us across the oceans and islands of Bas-Lag, showing more locations and hinting at grander vistas lying beyond the horizon. It's a dizzying travelogue of invention and weirdness and works excellently.

The characters are an interesting bunch, from cold and remote Bellis Coldwine, our main protagonist, to Uther Doul, the city's resident badass warrior with a philosophical streak and a mighty sword (if The Scar had come out a bit later, I'd have suspected Anomander Rake as an inspiration). Even the secondary cast is superb, such as Tanner Sack, a Remade slave in New Crobuzon who becomes a respected and worthy citizen of Armada, and Shekel the cabin boy, a potential cliche who becomes a compelling character in his own right. Even barely-seen characters like the Brucolac, Hedrigall the lookout and the steamborg Angevine hint at tantalising depths. Mieville also continues his tradition of giving good monster, with the mosquito-women in particular being memorably horrific.

The Scar (*****) may be China Mieville's masterpiece, a rich and captivating weird novel of the fantastic. It is available now in the UK and USA.
Posted by Adam Whitehead at 09:12

Wait, what? The protagonist is a librarian?! Why did I not know this? I guess now it is my librarian duty to read this book!! As if I needed any more excuses ;)

Bought it today on your recommendation. Sadly no commission for you.

One of my favourite books of all time and agree with you on all points about his other work (well, the novels I have read). His imagination in this book was incredible. He also tends to put a lot of the action off stage which actually makes it all the more intriguing. There are only so many times you can read about a sword fight before it starts to get old. You didn't mention the vampire character, The Brucolac, who I found really interesting. For me he had the best line in the entire book.

Completely agree with you on The Scar and Perdido Street Station. Even if you found PSS draggy, you should try The Scar. I'm glad I did.

I'm reading the Perdido street station now and enjoying it but kind of agree with you.

I'll borrow my friend's copy of The Scar next.

The Scar is one of my favorite books of all time. I've read it maybe three times, and every time I don't want it to end.

When friends ask where they should start with Mieville, I always recommend The Scar. Yes, it's sort of a sequel to PSS, but The Scar stands on it's own just fine.

beautiful book. It took me a while to get into this one, and found it pretty slow moving for about the first two thirds, but that final hundred and twenty or so pages was incredible. Mieville's writing is delicious and makes even the slow parts worth savouring