Entertainment Weekly have put up no less than ten new publicity photos for Game of Thrones on their website, whilst there will be additional coverage in the next print issue. 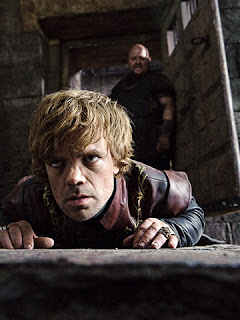 Tyrion having a good day. Credit: Helen Sloan/HBO.
Some pretty cool stuff there. The pictures are:


All-in-all, very good stuff. The costumes and sets look great, the actors (even the much-maligned Mark Addy) look like their roles and the whole thing is impressive.
Posted by Adam Whitehead at 08:06

I love the look of the food on the table in front of Cersei. Looks really, authentically gross :)

Dunno why Addy would be maligned, he's a great actor. He was great in Red Riding 1983.