Game of Thrones has wrapped its shooting in Malta, but has left behind a potentially damaging legacy. One of the scenes filmed on the island (or, more accurately, at Dwerja on the smaller island of Gozo) was the wedding of Daenerys Targaryen (Emilia Clarke) to Khal Drogo (Jason Momoa), a warlord of the Dothraki. In the novel this scene takes place on open, grassy fields on the landwards side of the Free City of Pentos, but the producers of Thrones opted for the more spectacular backdrop of the Azure Window, a notable rock formation on the coast. 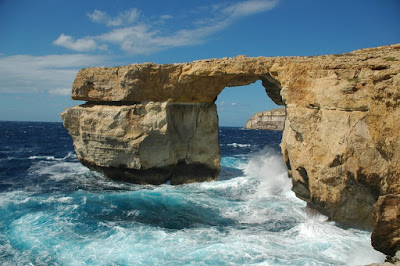 The Azure Window at Dwerja on the island of Gozo, Malta.
Because the beach was hard and rocky, the producers and HBO opted to cover the beach with artificial sand. They coordinated with the Malta Environment and Planning Agency (MEPA) to ensure the environment was protected and clean-up guidelines were followed. Filming proceeded without a hitch and passers-by and tourists were allowed to watch and even take photographs. Unfortunately, the sub-contractors HBO hired to undertake the clean-up did a shoddy job and left the beach in an unpleasant state, which triggered both a major condemnation from local authorities and an apology from HBO over the incident. 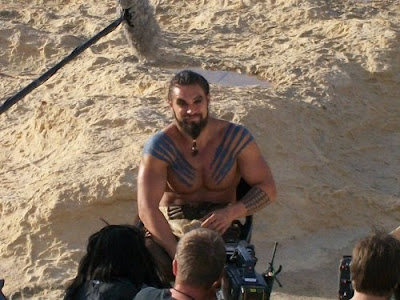 Jason Momoa as Khal Drogo, photo from David Crowe's blog.
However, the ante was raised when a local expert declared that the damage to the location was far more severe than first realised, possibly resulting in the 'total elimination of the ecosystem' on the site. The issue has also become a political hot potato, with MEPA itself criticised for allowing filming to take place in such a fragile area to start with. MEPA has also been accused of a conflict of interests, as the same organisation is responsible for both protecting the environment and also making money out of allowing the use of some protected sites for filming or other activities. MEPA in turn has blamed the production company for not informing them of the full extent of filming and the modifications they were making to the site. However, it has been revealed that government inspectors were on-site during the rest of filming on Malta, suggesting that they would have either been at Dwerja during the filming, or should have been.

The clean-up on the site is still ongoing more than two weeks after filming was completed, and a full assessment of the damage caused to the location will not be available until after that operation is complete. Whilst obviously neither HBO nor the production team meant to cause this amount of damage, it has cast some bad light on the production. Should the damage be found to be extreme, it may cause severe political ramifications on Malta (where, it should be remembered, the production team would like to return to film the King's Landing material for later seasons). This story could run and run.
Posted by Adam Whitehead at 12:27

I has there last summer, this is what the terrain used to look like:

And this is all and artistic licence for the lulz =S.

That's a real shame; casts a bit of a pall over the whole thing. It sounds like no one person/side is entirely to blame, but I think all sides should have put more effort into making sure that such a unique site was not damaged.

It is sad, especially since we are not very considerate with the nature. It seems that we are doing everything in our power to ruin the environment around us and all for entertainment.
I've been to Malta and it is an interesting country, with many wonderful places. That's why it is so much sadder to read about this situation. Also, I am also sad because it seems that are more and more such news where environment is not taken too much into consideration.

This is terrible. How many native crabs, escargots, and seabugs must die beneath a layer of awful sand in the name of hollywood?

The answer is: if only one worm died, it would be one worm too many.

One apology is not enough. I demand also a somewhat interesting documentary on the ecosystem of rocky stagnating beaches on Malta to be produced immediately.

I really have nothing against enviromentalists (or nature itself in general), but if they do anything to boycott the show for that, im going to strip down to my bare ASS and set myself on fire beacause at this point the show looks fantastic enough that it dosent need those problems. on that same token however, hopefully HBO is working to make efforts (if any at all) to make sure that the enviroments they use are treated with respect.

Sounds like HBO hired a local company to clean up their own land, and they just did a bad job. This stinks of something, but is not HBO's fault in the least.

Yeah, later reports agreed that whilst it was a bad idea to let filming happen there, it wasn't as bad as initial reports had indicated and most of the damage was cleaned up. So HBO dodged a bullet with regards to bad press there.

Every Maltese citizen knows what a disgrace MEPA is to the whole country. I blame MEPA more than HBO and the "cleaning crew". Why can't we Maltese do anything right?

ever been to malta? there's so much garbage lying around everywhere that i believe there cant be more damage done by some sand. I bet before they where able to sand the area, they had to clean it from plastic, bottles, cans etc.

For gods sake what, envirementalists are doing to Malt is that they are ruining Malta.They are protecting the countryside by leaving half delapidated farm houses ruins an eyesore in the country where a family could live if been giving permit from MepaAs to the Dwejra saga the blame is all of bthe cntactor who had done the clearing.One can go and see the damage to the rocks all scratcedh by caterpillars (gafef) as I had seen it myself.The damage about how we're treahing foregen flim companies had bee done and those who were responsible are all to blame.