BBC America has released the first publicity images for Terry Pratchett's The Watch and, well, yikes. 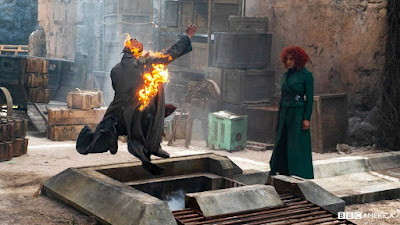 In this first image, Sybil Ramkin (Lara Rossi) appears to have either set someone on fire or are watching them on fire, plummeting through a hole in an Ankh-Morpork street. If you're thinking, "This never happens in the books," and "Why is a middle-aged, stout woman now a smoking hot vigilante?" you are not alone. 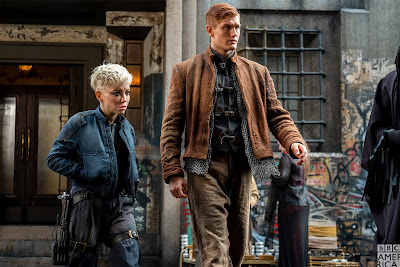 In this second image, we meet Constable Angua (Marama Corlett) and Constable Carrot (Adam Hugill) of the Ankh-Morpork City Watch, although they seem to have lost their armour. Carrot at least looks spot on, if a few years older than the character. 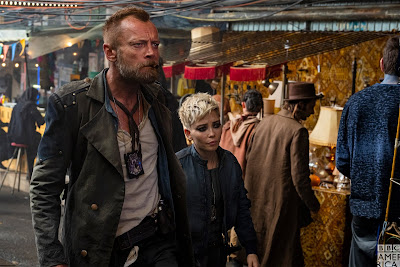 In this image, Sam Vimes (Richard Dormer) and Angua (Marama Corlett) visit an Ankh-Morpork market. This image is the clearest example of a major shift in the setting aesthetic. Whilst the books are set in a late medieval/early Renaissance-level city slowly transitioning into a steampunk one (albeit over the course of forty books), the series looks set to open in a full Victoriana environment, with no traditional armour and the Watch characters wearing lanyards in lieu of a uniform. 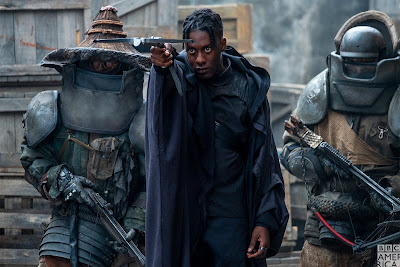 This image shows Carcer Dun (Sam Adewunmi) up to no good. His guards appear to have parachuted in from a mid-franchise Final Fantasy video game, but okay. 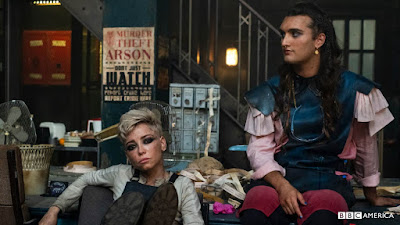 Angua (Marama Corlett) and Constable Cheery (Jo Eaton-Kent), the latter of whom doesn't appear to have a beard. Or be a dwarf.

The TV show has attracted negative coverage for its decision to only be "loosely inspired" by the books and instead pursue their own path with regards to casting, writing and setting. These images are not likely to improve this.
Posted by Adam Whitehead at 12:04

YIKES indeed. I love the Watch sub-series, and these images are really disappointing.

I don't know, my interest is kinda piqued. If you're going to adapt something, then you should do your own unique thing with it. Add something that makes it yours, not just recreate. I was severely disappointed by the unsubtle, clumsy, blue-orange slog that they called "His Dark Materials", which stayed slavishly with the text, except when it arbitrarily strayed from it in all the wrong places.

They're showing they're not giving a damn about the Discworld fans, which is just as well, because late-stage Discworld (Going Postal and on) was a mess of soap-boxing Mary Sues from a writer allergic to non-happy endings, who made a point out of including Death everywhere but never dared to kill off a main character.

This could be good. Most likely it won't, but it's got a better chance than HDM.

Yikes and yeesh, indeed! It begs the question of why they even bothered to call it an adaptation of Discworld when the first thing they did was to throw out the plots, the characterisations and settings?

I'm picking it will land around Max Landis' adaptation of Dirk Gently in terms of sheer awfulness.