Gregor Vorbarra, Emperor of Barrayar, is due to wed Laisa, an heiress from the (reluctant) Imperial client-world of Komarr. For the Emperor's diminutive cousin Miles Vorkosigan, the great social event provides the perfect cover for his courtship of the Lady Ekaterin Vorsoisson. Unfortunately, events are complicated by the complicated love life of Miles's clone-brother Mark, two landmark legal disputes in the Barrayaran Court...and a whole ton of butter-producing bugs. 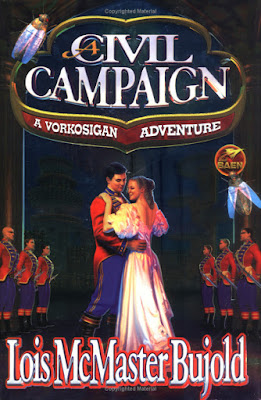 A Civil Campaign (subtitled A Comedy of Biology and Manners) was originally conceived by Lois McMaster Bujold as the second half of Komarr. However, she separated the two books out for reasons of length (A Civil Campaign is the longest novel in the series by itself) and also for tone. Komarr is a serious book but A Civil Campaign is a romantic comedy that at times descends into flat-out farce.

It's hard enough to carry off romance or comedy or science fiction by themselves, so for Bujold to tackle all three genres in the same novel suggests either cast-iron confidence or outright insanity. After completing the book, the key to its success seems to be a bit of both. A Civil Campaign is flat-out crazy, a dramatic change in tone from the rest of the series to date. For starters, the novel has five POV characters, which is unusual given that most books in the series have just one, Miles himself. This novel adds Mark, Ivan, Kareen Koudelka (Mark's own romantic interest) and Ekaterin to the mix. This makes for a busier and more tonally varied novel than any of the preceding ones. Even more interesting is how Bujold mixes up the POV storylines: the normally frivolous Ivan gets the serious, political stuff to deal with whilst the emotionally-scarred, PTSD-suffering Mark gets the farcical butter-bug storyline to handle. Expectations are subverted throughout with great skill.

Most intriguingly, this is a novel about adults, relationships and how damaged people can help (or hurt, if they are not careful) one another or choose their own paths through life. Through comedy, tragedy, horror and humour, Bujold builds up each of her POV characters (and numerous supporting ones) and deconstructs them in a manner that is impressive and enjoyable to read.

That said, a key subplot revolves around a disputed succession between a dead lord's daughter and nephew, with Barrayar's laws of male inheritance favouring his nephew...until his daughter gets a sex-change. The resulting legal maelstrom is the result of a collision between fantasy cliche and common sense (and Barrayar has always felt it had more in common with Westeros than an SF setting) and signals an impending transformation in the planet's social order. It's also - arguably - the novel's sole misstep, with Bujold uncharacteristically more interested in the legal and political ramifications rather than the character-based ones. That isn't to say that Donna/Dono isn't a fascinating character, but it feels like Bujold did not engage with the issues raised by the gender reassignment with as much as depth as she might have done.

There is some action in the book (a single shoot-out, which feels a bit incongruous given the tone of the novel, and a more farcical, Bugsy Malone-esque battle sequence involving tubs of bug-butter) but primarily A Civil Campaign (****½) is a comedy of manners, a grown-up romance and a great big coming-together of almost every major subplot and character in The Vorkosigan Saga to date. It's a terrific read and is available now as part of the Miles in Love omnibus (UK, USA).
Posted by Adam Whitehead at 20:48

See! I am so pleased you saw this reread through. This book is one of the high points of this series. In fact, I dare say, it might be the high point. The later books are less enjoyable.

Miles in love is probably my favorite one even though I'm not into comedy-romance at all...
My favorite part is when Ekaterin read Mile's letter.
I felt so embarrassed crying in that particular moment later. :)