The Fringe team has saved two parallel universes from destruction but have paid a heavy price they are no longer even aware of. Peter Bishop, who as a young boy was saved from death, irrevocably altering the timeline, has been removed from existence. His Fringe team-mates have no memory of his existence and his removal has led to numerous changes, such as the continued existence of a very old enemy. But - somehow - Peter returns to find a world which he is no longer part of. Can he find a way "home"? 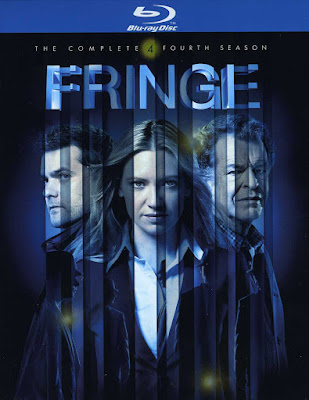 Fringe's penultimate season starts off in a difficult place. The timeline of both universes has been reset and although things are broadly similar, a whole host of details have changed. These include Olivia and her sister being raised by Nina Sharp and Walter, never having been brought out of his shell by Peter, still being a crazy recluse. It is fascinating to map these changes, and the way the writers cleverly use them to resurrect previously-slain foes and revisit past plot points, but it does cause some problems with the viewer not being sure how much to invest in this new universe. Is Fringe going to hit the reset button at some point and revert things back to the way they used to be?

If you can get over that issue, there is much to enjoy with this season. The notion that parallel universes can exist but time can also be rewritten within those universes is one that hard SF has played around with a few times, but this is the first time that an SF TV series has treated the concept with some seriousness and not gotten bogged down in technobabble. The timeline reset also allows the writers to drop a few storylines they developed earlier on which clearly they didn't know how to follow up on (particularly Fauxlivia's pregnancy). However, a late-season development allows them to revisit some of these plot threads and give them a more elegant form of closure.

Once the season sorts itself out, there is much fun to be had from having our characters (in both universes) pitted against a returning old enemy (who later turns out to be a front for another returning antagonist) who is a step ahead of them at every turn. The season does a good job of balancing out its share of characters, with Peter dominating mid-season but Seth Gabel's Lincoln Lee rising to the fore later on. Lincoln has always been an interesting character, but his early placement this season as Peter's effective replacement feels a little off. That said, the writers use the oddness of his position to inform the storyline and eventually his character achieves a destiny that is fitting.

A key subplot through the season revolves around the ongoing mystery of the Observers. Some fans thought we wouldn't get much, or any, explanation for these mysterious beings and their objectives, so it's a huge shock when we do get a detailed explanation for their origins and their ultimate goals. These ramp up in the nineteenth episode, Letters of Transit, which fast-forwards to the year 2036 and a nightmarish, dystopian possible future that awaits our heroes. Given that Fringe was going to be cancelled after the fourth season (the ratings were utterly diabolical) and was saved almost solely by the goodwill of fans at the network, this was an incredibly bold decision that could have left the series on a massive downer. As it stands, Fringe was reprieved at the last minute and given a final season to wrap up its storylines.

Unfortunately, Season 4 does run out of steam a little before its end. There's some wheel-spinning episodes and even Fringe's generously elastic notions of plausibility take a serious beating with some plot developments. The actual season finale is also extremely weak, with some bitty plotting and Blair Brown being given some hideous exposition to relate to the other characters (the writers seemingly later apologised by giving her an incredibly poignant and well-played storyline in the final season).

The fourth season of Fringe (****) is probably the show's weakest, although it's still eminently watchable, highly entertaining and, as usual, excellently played by a tight, capable cast. It is available now in the UK (DVD, Blu-Ray) and USA (DVD, Blu-Ray).
Posted by Adam Whitehead at 18:45