A D&D movie set in the FORGOTTEN REALMS is greenlit

The mighty battle for control of the Dungeons and Dragons film rights that has raged since time immemorial - or maybe for about two and a half years - has ended with an unexpected ceasefire and coming together of the former battling parties. This is disappointing to D&D fans, who were anticipating a full-scale Epic Level conflict between titanic powers. 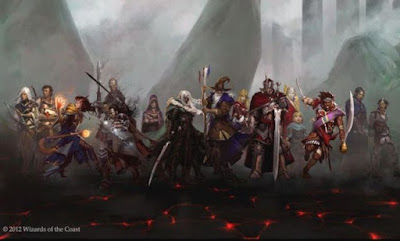 To recap, way back in 1994 TSR, the company that created D&D, ill-advisedly sold the film rights to the game to a budding film student named Courtney Solomon for a song. Solomon went on to make the extremely unimpressive D&D movie released in 2000, starring Jeremy Irons. Solomon's company went on to produce two even weaker sequels, released in 2005 and 2012 respectively.

In the meantime, TSR was gobbled up by Wizards of the Coast, a company on the rise thanks to its Magic: The Gathering card game. WotC was then in turn acquired by Hasbro, one of the biggest toy and hobby companies in the world. Neither WotC nor Hasbro seemed impressed by TSR's decision to sell the D&D film rights to Solomon, but did lend promotional support in getting the films released. However, their support over the third film appeared lukewarm. In particular, Hasbro believed that by releasing the third film to TV (instead of cinema or a home video-first release), Solomon was giving up his legal rights to the franchise. Hasbro entered negotiations with Universal to develop a new D&D movie. Solomon disputed this, more vociferously after Warner Brothers acquired Solomon's rights for a very large sum of money and began developing their own film.

The battle lines were drawn, with neither side willing to back down. Fans didn't really have much to pick between here: Solomon's films had been utterly terrible, but Hasbro's excruciating Transformers movies (despite their high profitability) didn't exactly fill them with confidence either. The one bright spot to Hasbro winning the battle was that it would at least reunite the disparate parts of the film licence together: Solomon had only bought the rights to the core D&D rules. The rights to the iconic worlds (such as Forgotten Realms and Dragonlance) and all of the novels remained with Hasbro. If Hasbro won, they could make a film set in one of the iconic worlds without having to worry about removing elements covered by Solomon's licence.

Fortunately, the new deal eliminates such problems. Universal are the big losers here, having been tossed aside by Hasbro as they have entered into a new deal with Solomon and Warner Brothers. The new deal allows all three parties to collaborate on a new, big-budget D&D film. Interestingly, the announcement confirms that the new film will be set in the Forgotten Realms. This suggests some nice gaming strategy by Hasbro: if the new movie is a huge success and Warner Brothers try to pull out at a later date, they won't be able to make any more films set in the Realms, as Hasbro firmly retains the rights to that setting.

Whether the new film will be any good or not remains to be seen. I have argued before that, despite numerous weaknesses, the Forgotten Realms novel The Crystal Shard could make for an acceptably entertaining action film. However, Hasbro may be keener to create an original story that can more decisively help shift copies of the new Dungeons and Dragons 5th Edition game. It'll be interesting to see what direction they take.
Posted by Adam Whitehead at 20:35

Email ThisBlogThis!Share to TwitterShare to FacebookShare to Pinterest
Labels: dungeons and dragons, forgotten realms, news, this will probably suck but you never know, universal, warner brothers

I've read that one! I remember it being a lot of fun, and actually my favourite of the AZURE BONDS series (maybe oddly, as Alias wasn't in it).

Wait, there was an Azure Bonds series? Huh. I only ever saw the first one.

Yup, officially THE FINDER'S STONE TRILOGY. There was AZURE BONDS, THE WYVERN'S SPUR (which follows two side-characters from the first novel) and SONG OF THE SAURIALS (which focuses on Alias again). MASQUERADES is a stand-alone sequel to the trilogy, again focusing on Alias. A major subplot in the trilogy - the ascension of Finder to godhood - then continues in FINDER'S BANE and TYMORA'S LUCK.

IIRC, the original trilogy was decent, especially for introducing a new race in the form of the saurials, aka sentient humanoid dinosaurs from another dimension. They kind of got ignored after 2nd Edition. MASQUERADES was also a reasonably entertaining stand-alone. I never read the later boos, which are spin-offs.

A fan here but I'm so not looking forward to the movie it's almost funny. Hope they come out with a great movie but...I'll believe it when I see it.