Bethesda have joined the GoG bandwagon by releasing some of their older, classic RPGs and some other games inherited from other companies onto the service. 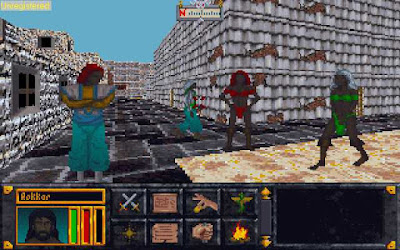 Of interest to fans of Skyrim and The Elder Scrolls Online will be the older games in the Elder Scrolls series. The Elder Scrolls III: Morrowind is by far the most critically highly-acclaimed game in the series and the most unusual, with taxi services provided by giant stilt-legged monsters, very few traditional fantasy cliches and the constant threat of being killed by annoying cliff racers. Far more obscure are the two action-oriented spin-offs, the dungeon crawler Battlespire and the third-person action game Redguard.

As a bonus, anyone buying any of these titles also gets The Elder Scrolls: Arena and The Elder Scrolls II: Daggerfall added to their collection for free. These games have been free for years on Bethesda's website, but it's nice to see them being put out on GoG. Certainly playing Arena in 2015 - 21 years after it was originally released - is an, er, interesting experience when comparing it to Skyrim.

Bethesda have also released Fallout, Fallout 2 and Fallout Tactics on the service, likely to help set the scene for the release of Fallout 4 in November. In addition, they have also released some of id's back-catalogue, via special editions for Doom, Doom II and Quake.
Posted by Adam Whitehead at 22:46