The Earth has been ravaged by nuclear war, with the survivors either being mutants ("Grounders") who have adapted to the radiation or genetically-enhanced exiles who have survived in space on an orbiting ark. A hundred delinquents have been sent down from the Ark to see if the ground is survivable, but they have also encountered both the Grounders and a society of survivors living in a massive fallout shelter under Mount Weather, west of the ruins of Washington D.C. The hostility and paranoia of the shelter-dwellers forces both the crew of the Ark and the Grounders into an uneasy alliance. 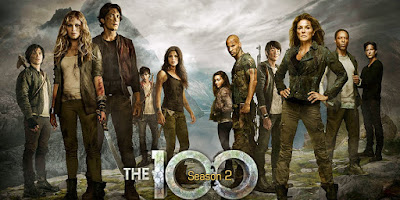 The first season of The 100 took a while to get going, being mired in tiresome teenage romance and lots of trekking around Canadian woodland for quite a few episodes before it cut loose and turned into a bleak story of survival and moral compromises. The second season of The 100 turns this up to the max and is a much stronger set of episodes from the off.

The second season benefits from a multi-stranded storyline which rotates through sets of characters and locations. The main storyline sees the youngsters from the Ark forced to team up with the survivors of the station's dramatic crash-landing in the Season 1 finale and then attempt to forge a peace with the Grounders so they can rescue their friends (from both factions) who are imprisoned under Mount Weather. This story is rich with drama, with both camps having internal problems and the kids from the Ark - who have spent months surviving on the ground - understandably refusing to relinquish authority to the very people who sent them to their deaths. There is the scope for melodrama, but the show largely skirts it through a relentless pace, stronger worldbuilding (the culture of the Grounders is explored a lot this season) and occasional harsh plot turns that manage to out-shock Game of Thrones.

The main subplot is set inside the Mount Weather shelter and explores what happens to the forty-odd kids taken prisoner at the end of Season 1. This story is also pretty decent, but becomes a little stretched out due to its obvious benefits as a budget-saving measure (since it uses just a few interior sets as opposed to the tons of exterior footage for the Ark/Grounders stuff) and a limited number of characters to explore. Another storyline follows Jaha, the former leader of the Ark, as he - quite randomly - survives the Ark's crash and becomes - even more randomly - a messianic figure who believes he can lead his people to salvation across the desert. This story is the most preposterous, but works because Jaha is played by the hugely enjoyable Isaiah Washington and purely exists because the producers were going to quite blatantly kill the character and then decided to keep him around because they liked the actor. Fortunately it does fulfil a purpose at the end, forming the bridge into the forthcoming third season which will up the stakes even further.

The series works thanks to some enjoyably spirited performances from an enthusiastic cast, a genuinely impressive desire not to wimp out on hard decisions and moral muddles, a plot that spins on a dime and some quite impressive action sequences. That's not to say it isn't perfect. Some storylines feel a bit random and the longer episode run (three more than in the first) feels like it was more accomplished with filler than because more episodes were needed to pack everything in. An episode featuring characters hiding from an escaped gorilla in a desolate zoo is rather pointless, for example. Dialogue also too often based around exposition, and the show does feel like it could do with more humour. More on the plus side of things, the forced romance elements have been dialled way back (and the few romances which do emerge feel a lot more plausible) and the characterisation is very strong. Particularly impressive is how Bellamy, the primary antagonist in the first half of Season 1, evolves into a heroic figure through a natural and believable progression of events.

A few hiccups aside, the season builds up to a genuinely startling finale (apparently based on the idea of what if the good guys were put in a position where they had to carry out a Red Wedding?) that leaves a lot of unanswered questions for the third season, due to air in early 2016.

The second season of The 100 (****) improves on the more variable opening season and soon becomes hugely enjoyable viewing. The season will be released on 13 October on DVD and Blu-Ray.
Posted by Adam Whitehead at 13:33

Email ThisBlogThis!Share to TwitterShare to FacebookShare to Pinterest
Labels: 2001: a space odyssey, cw, the 100, the 100 tv