Winterfair on Barrayar and the unthinkable is happening: Miles Vorkosigan is getting married. For his family this is a time of great happiness and joy. For Armsman Roic, one of Miles's long-suffering security officers, it's a time of paranoia, vigilance and stress. When things start to go wrong, Roic joins forces with one of Miles's old Dendarii comrades to ensure that the wedding goes off without a hitch. 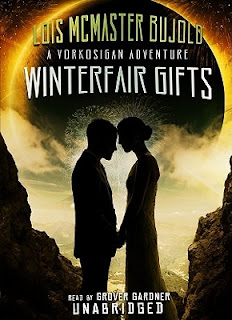 Winterfair Gifts is a short novella set after the events of A Civil Campaign. It centres on Roic, a minor supporting character most notable at this point for engaging in combat with overzealous offworld security officers whilst half-naked and covered in butter (produced by insectoids from another planet, but that's another story). The novella actually feels a bit like an apology from Bujold to her character, giving him a chance to shine in his own story.

It's an enjoyable piece, with some laughs, some drama and some pathos in the relationship between Roic and Taura, the genetically-engineered soldier Miles rescued from Jackson's Whole. The drama part of the novel - including an assassination attempt and a dramatic arrest - feels almost tacked on, with much of the pivotal action happening off-page. Bujold's focus is on the two main characters, their development and their unexpected relationship, which is effective and touching.

A minor interlude in the overall Vorkosigan Saga, then, but one that is enjoyable and worth reading. It is available now as part of the Miles in Love omnibus (UK, USA).
Posted by Adam Whitehead at 10:59