An Ember in the Ashes by Sabaa Tahir

Laia is a Scholar, a member of the underclass subjugated by the Martial Empire in the city of Sarra. When her brother is abducted by the Martials and her grandparents murdered, Laia is reluctantly forced to ally herself with the Resistance. In return for their help in finding and rescuing her brother, Laia has to infiltrate Blackcliff Academy, where the Empire's most elite soldiers are trained. 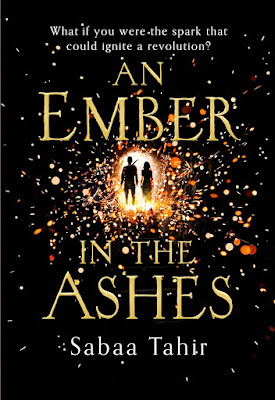 At the same time, Elias is a Mask-in-training at Blackcliff. Sickened by the Empire's callousness, he contemplates running away but is instead compelled to remain when he is prophesied to become the next Emperor and could lead the Empire into a new golden age. However, first he must pass the Trials and win the crown for himself...and must defeat his best friend in the process.

An Ember in the Ashes made a bit of a stir when it was acquired by Penguin last year, winning a large advance and resulting in the film rights being sold for seven figures before it even hit the shelves. The novel also piqued my interest because it was apparently a stand-alone, with more books in the same world possible but apparently not necessary.

Well, that, it turns out, was not true. An Ember in the Ashes is the first volume of a multi-part story and ends on a series of cliffhangers, so those looking for a stand-alone book are directed elsewhere. The book also feels a bit overly familiar at times: the Trials that define Elias's storyline are more than a little reminiscent of The Hunger Games while the brutal regime brought down through a reluctant female double agent reminded me more than a bit of the Mistborn trilogy. Tahir mixes up the standard tropes enough that the book never feels like a rip-off, most notably by taking the standard YA central romance and turning it into more of a tragic story of betrayal and the promise of later all-out vengeance, which is at least something a bit different.

Elsewhere the book attempts a few interesting things: the novel is written in the present tense, which normally would have me hurling it out the window. However, Tahir's prose is good enough to overcome this stylistic quirk (one which a lot of readers don't have). The prose is readable but occasionally feels a bit more flavoured and distinct than the norm before settling back into something more generic. If Tahir could hold the quality of the prose at her best for longer, the sequels could be a lot better. The setting, which is more inspired by Rome than most medieval fantasy settings, also holds some promise.

The most disappointing thing about An Ember in the Ashes is how standard it is. It's reasonably well-written, the setting is interesting and the characters enjoyable enough to hold the reader's attention, but the book doesn't really bring anything new to the table. It's a solid story told in a solid way which is good but not outstanding. The story and setting are a little more brutal than is normal in a YA novel, including the frown-inducing appearance of almost-rape for no apparent reason, but it's not exactly going all A Song of Ice and Fire. Some of the ideas are also rather implausible: the training for the Masks is so insanely brutal that it's likely that the Masks simply wouldn't exist due to the rate of attrition among applicants.

That said, An Ember in the Ashes (***½) does hold enough promise to warrant a second look when the sequel appears. The novel is available now in the UK and USA.
Posted by Adam Whitehead at 14:09

Email ThisBlogThis!Share to TwitterShare to FacebookShare to Pinterest
Labels: an ember in the ashes, sabaa tahir