Two years have passed since the ferocious battle for Hinzerhaus Fortress on Jago. The Tanith First and Only won a famous victory, but only at a horrendous cost in lives. Battered and bleeding, the Tanith First finally won a respite, being rotated back to sector HQ on Balhaut for a well-earned rest after ten years on the front lines. 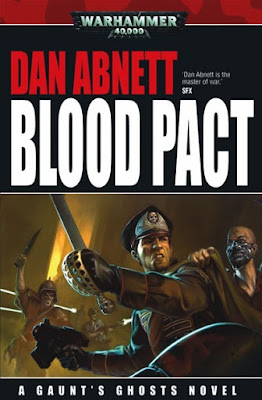 However, two years of inaction has led to problems with discipline, training and morale. In the midst of these problems, Colonel-Commissar Ibram Gaunt is summoned to a clandestine meeting. An agent of the archenemy has been taken prisoner and wants to give up valuable intelligence...but the Blood Pact have been sent to silence him by any means necessary.


Blood Pact is the twelfth novel in the Gaunt's Ghosts series and marks the beginning of the fourth distinct story arc in the series, "The Victory". The opening of the book feels like Dan Abnett is taking a deep breath after the mayhem of the previous novels, which featured some of the bloodiest and most frenzied battles in the series to date, but it's not too long before the action kicks in again. Blood Pact is a short novel taking place over one single night and morning of carnage as the Blood Pact - the Ghosts' sworn rivals - arrive to carry out a suicide assassination task, succeed in splitting up the Ghosts and also take advantage of internal divisions as the Ghosts find themselves still under suspicion from the Inquisition about their mission to the Chaos-tainted world of Gereon years earlier.

As usual with a Gaunt's Ghosts novel, the pace is blistering, the action is superbly-handled and the characterisation shines. Gaunt's return to the world where he lost his former command but gained a new one adds new shades to his character. Background Ghosts nicely come to the fore, such as Maggs, whilst we touch base with a few key Ghosts who've been lower in profile in the preceding books. However, Blood Pact does feel like a lesser entry in the series. Perhaps it's due to the increasing frequency between novels (Blood Pact was released in 2009 and one more book, Salvation's Reach, in 2011 with nothing since), but Blood Pact feels a little like too much set-up at a moment in the series when it feels like it should be perhaps more decisively moving towards a conclusion. This can be seen in the fact that while a few key characters get a lot of time in the sun, numerous other Ghosts (including many who played key roles in the preceding few books) suddenly drop into the background. If Gaunt's Ghosts was a TV series (and we can but hope), this is the relatively low-key opening to a new season which is reacquainting you with all the characters before the big storylines kick in.

On that basis, Blood Pact (***½) does a good job of setting up its immediate sequel, Salvation Reach, and tells a rollicking good action story. Not one of the best books in the series, but still an effortlessly enjoyable slice of military SF from the best author in the subgenre. If you want to read the book, Blood Pact is currently only available as an ebook from the Black Library direct. However, the entire series is being rolled out in new editions, so it should be back in paperback in a few months.
Posted by Adam Whitehead at 20:00