After a torturous on-off journey through development hell, the big screen version of Stephen King's Dark Tower series has finally been greenlit and approved, this time with Sony. The script is in place and the film will shoot through 2016 for release in 2017. 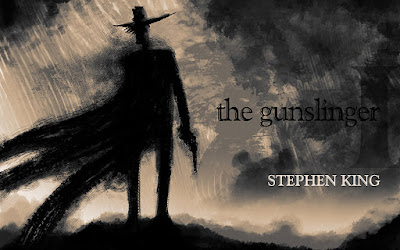 The Dark Tower book series consists of seven novels: The Gunslinger (1982), The Drawing of the Three (1987), The Waste Lands (1991), Wizard and Glass (1997), Wolves of the Calla (2003), Song of Susannah (2004) and The Dark Tower (2004). In 2012 King also released a side-novel, set between the fourth and fifth novels, called The Wind Through the Keyhole. However, The Dark Tower also provides the mythological underpinning and background for almost the entirety of Stephen King's output: The Stand and The Eyes of the Dragon are particularly strongly connected, but 'Salem's Lot, The Talisman, IT and Rose Madder (among many others) also feature allusions and connections to the seven-volume series.

Attempts to adapt the entire series began in 2007, when J.J. Abrams took an interest in the project. He initially recruited massive King fans David Lindelof and Carlton Cuse (then showrunner-writers on Lost) to help work on the project, but they decided not to continue, wanting to work separately on other projects after spending six years on Lost. Having committed to the new Star Trek movies, Abrams also decided to withdraw from involvement.

Ron Howard then picked up the baton in 2010, beginning an ambitious development process with Akiva Goldsman (the writer of A Beautiful Mind and Cinderella Man who also worked as a writer-director-producer on Fringe). This plan would include several films and two seasons of a television series linking them together. This ambitious plan would have starred Javier Bardem as Ronald Deschain, with Naomie Harris tapped to play Susannah. Universal Studios picked up the rights and were close to greenlighting, but got cold feet at the budget (possibly feeling the pinch after stumping up very large budgets for films such as Snow White and the Huntsman and Battleship) and withdrew.

In late 2011 the project transferred to Warner Brothers, with the result that their TV partner HBO would pick up the TV portion of the project, regarded as a huge coup. Development continued, with occasional suggestions (following the success of Game of Thrones) that the project might move wholly to television. However, in 2012 Warner Brothers and HBO decided to pass on the project. By this time Bardem was no longer attached, with actors from Russell Crowe to Liam Neeson now being discussed for the lead role of Roland.

Sony picked up the rights a few months ago, with Ron Howard moving from director to producer. Nikolaj Arcel (the director of A Royal Affair) was announced as director last month. Goldsman has reworked the script, and the plan now appears to be for a series of films. However, if Sony decides to proceed with a TV portion of the project they are well-positioned through their strong relationship with AMC (their last collaborations being the immensely successful Breaking Bad and its spin-off, Better Call Saul). No casting has yet been announced, although Breaking Bad's Aaron Paul was reportedly under consideration for the role of Eddie Dean last year.

The first Dark Tower movie, presumably based on The Gunslinger, will be released on 13 January 2017.
Posted by Adam Whitehead at 22:11

For those not so familiar with King's work I'd like to note that there's also the novella The Little Sisters of Eluria which serves as a prequel to the series.
It was first published in Silverberg's anthology "Legends" and was later included in King's collection "Everything's Eventual".

I feel like it could be a mistake to make a single movie based just on The Gunslinger. I'm not sure there is enough there. My preference would be for the film to contain the events up through the first half of The Wastelands, using Jake as the constant thread for Roland through the film.