The Witchwood Crown, the first volume in Tad Williams's Last King of Osten Ard trilogy has been delayed until March 2017, due to issues at the publisher. 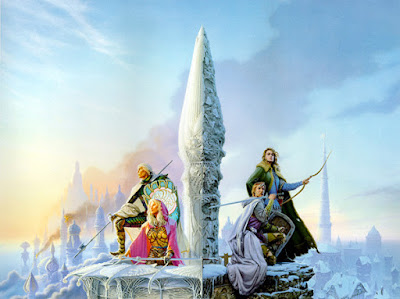 DAW and Penguin Books have been forced to delay the novel due to undisclosed publishing problems with their schedule. The novel is mostly complete and Williams is working on edits and rewrites now. The novel had been planned for a Spring-Summer 2016 release, so this delay pushes back the novel almost an extra year.

Whether the delay means that there will be a much shorter gap before the second volume, Empire of Grass, is published remains unclear.

The Last King of Osten Ard is a sequel to the Memory, Sorrow and Thorn trilogy (The Dragonbone Chair, Stone of Farewell and To Green Angel Tower), published between 1988 and 1993. The original trilogy (named for three swords) chronicled the land of Osten Ard being torn apart in war, with a young kitchen-boy named Simon escaping the vast Hayholt castle and playing a pivotal role in saving the land from the machinations of the Storm King, Ineluki. Despite a standard premise, the trilogy is credited with revitalising the epic fantasy genre through some smart writing, strong characterisation and a mildly revisionist take on standard fantasy tropes, such as including characters with many shades of grey rather than being all good or evil, and challenging the notion of "inherently evil" races. George R.R. Martin has cited the first two volumes as being highly influential on A Game of Thrones, which he started writing in the summer of 1991. Later Song of Ice and Fire novels feature nods to Williams's characters (such as Josua and Elyas of House Willum, whose arms show a skeletal dragon and three swords). The trilogy is the biggest-selling of Williams's works, which have sold over 30 million copies to date, whilst To Green Angel Tower is the longest work of epic fantasy ever published in one volume, outsizing even the combined Lord of the Rings by almost 100,000 words.

The Last King of Osten Ard is set thirty years after the events of To Green Angel Tower and will feature both established characters from the first trilogy, some of their children and some completely new characters as well.

Meanwhile, there is some additional "big" news linked to Williams's work expected in September. This may be related to Warner Brothers acquiring the Otherland film and TV rights a couple of years ago, or possibly a development deal for Memory, Sorrow and Thorn (aside from Wheel of Time, currently mired in development hell, MS&T is probably the highest-profile fantasy series not under option at this time). Or it could be something completely different.
Posted by Adam Whitehead at 12:05

As far as I know, The Otherland option has already been allowed to lapse since Warner Bros. realized that it is not possible to do all four novels in one movie.

I'm really sad about the delay. MS&T is my favorite fantasy series of all time, and I was really looking forward to the new books. Does someone know what is going on with the publisher? What is the problem?

Damn. Say it ain't so! When I saw Tad's original post about the delay, I figured he was getting bumped to Autumn . . . not a whole year out.

I know it's different publishers, but maybe they don't want to compete with WoW??