A History of Epic Fantasy - Part 3

Seventeen years passed between the publication of The Hobbit and its much larger and longer sequel, The Lord of the Rings. However, this period was not without significant works of fantasy being published. 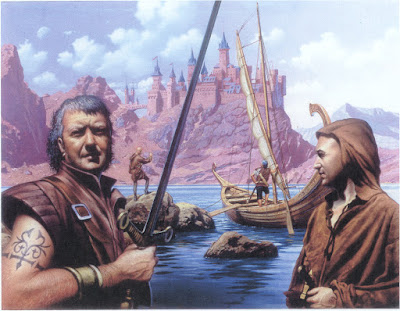 One of the more interesting fantasy works to emerge in the immediate post-Hobbit era was a series of short stories by the American author Fritz Leiber. Leiber, in collaboration with his friend Harry Otto Fischer, had created two characters loosely based on themselves, but also intended to subvert expectations of what fantasy characters could be. These characters were, of course, Fafhrd and the Gray Mouser. The duo appeared in thirty-six short stories and a full-length novel, published between 1939 and 1988. Initially they appeared in magazines such as Unknown and Fantastic, but in 1968 the stories began to be packaged in omnibus editions, at which point their sales began to take off impressively.

Leiber is, lamentably, not a household name but his influence was huge. Both Gary Gygax (the creator of Dungeons and Dragons) and Terry Pratchett read his stories whilst younger and found them hugely influential. Gygax even later licensed Fafhrd and the Gray Mouser's world of Newhon as an official D&D campaign world, whilst Pratchett's first Discworld novel, The Colour of Magic, is as much an affectionate satire of Leiber specifically as it is of fantasy as a whole. In particular, before taking it in its own direction in later books, the city of Ankh-Morpork in the earlier novels can be seen as a direct riff on Lankhmar, the most notable settlement of Newhon. Indeed, Lankhmar can be seen as perhaps the first archetypal fantasy city, a place of narrow alleys, raucous inns and rooftop chases. 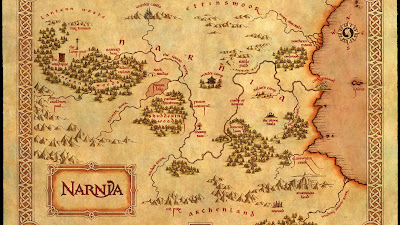 There was another author engaged in a spot of worldbuilding and subcreation closer to home as well. In 1938 C.S. Lewis published Out of the Silent Planet, a science fiction novel borne out of a conversation with his close friend, J.R.R. Tolkien. The two authors had agreed to write a series of complementary stories about space travel and time travel; Tolkien's story, The Lost Road (about the downfall of Numenor), was never completed as he prioritised work on The Lord of the Rings, but he did make use of the material he created for it for backstory to the new novel. Lewis not only finished his book but published two sequels (Perelandra and That Hideous Strength), creating the Space Trilogy. When looking for a new writing project, Lewis recalled an experience in 1939, at the outset of the Second World War, when his family home had to host three girls sent out of London in fear of bombing. Lewis used this as the seed to write a fantasy series set in a fictional world called Narnia.

The Chronicles of Narnia spanned seven fairly short novels, published between 1949 and 1956. The land of Narnia was described in some detail and Lewis used the fantastical setting to explore Christian themes of sacrifice and redemption. The series was critically acclaimed upon release, bringing Lewis fame and fortune that (for a time) eclipsed that of his friend Tolkien. However, Tolkien himself was cool on the series, in part because he couldn't help the suspicion that Lewis had modelled Narnia on Middle-earth and been inspired by the still-gestating Lord of the Rings, which he had been reading to his writing friends as work progressed (in particular, he was irritated by Lewis using the name "Numinor", despite it apparently being used as an affectionate nod at Tolkien).

As well as its worldbuilding and religious themes, Narnia was notable for its non-sequential, non-linear storytelling. Each book was self-contained, but jumped around in time and space, with some of the later books being prequels and interquels and the primary cast of characters changing with each novel, both ideas used in later fantasy series to keep things fresh for the author. 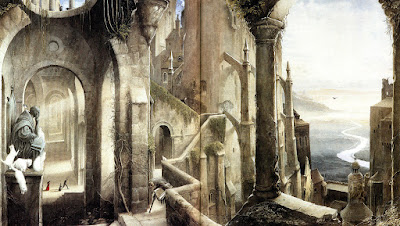 The other major key work of this period was written by another English author and illustrator: Mervyn Peake. In 1946 he published Titus Groan, a novel about the inhabitants of a colossal, crumbling castle called Gormenghast. The novel was dense and complex, but featured at its core a villainous point-of-view character called Steerpike, who was determined to bring down the ruling Groan family and take power himself. The story was too big for one volume and Peake continued the story in Gormenghast (1950), which concluded Steerpike's story rather definitively. Peake planned to continue the series, at one point considering no less than ten volumes set in the same world. He started writing a third book, Titus Alone, and made plans for two more (tentatively entitled Titus Awake and Gormenghast Revisited), but died at the tragically early age of 57. Titus Alone was published in 1959, but in rather butchered form. A proper edition was released in 1970, whilst Peake's widow wrote her own version of Titus Awakes that was eventually published in 2011.

The Gormenghast Trilogy is best-known for its setting, an ancient edifice of crumbling stone whose physical disrepair matches the declining state of the family that rules it. It is certainly not an epic fantasy, being more reminiscent of Gothic drama. However, the idea of impossible, vast castles - the Big Dumb Objects of epic fantasy - would live on in later works: the Hayholt of Memory, Sorrow and Thorn and Winterfell and Harrenhal (among others) in A Song of Ice and Fire owe some of their inspiration to Peake's work. 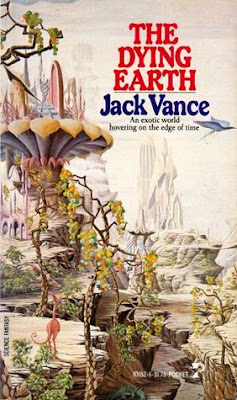 Back in the United States another author decided to start writing a series of short stories while at sea as part of the Merchant Marine. His name was Jack Vance, and starting in the early 1940s he began penning stories set in an unimaginably distant future when the Earth is dying and the sun is about to go out. Despite the alleged SF backdrop, Vance populated his far future setting with rogues, thieves and wizards. Although not epic fantasy as such - The Dying Earth (1950) and its three sequels instead creating a subgenre of their own - many of the touchstones of epic fantasy can be found in this series. There's the vigorously scientific approach to magic, giving the fantastic a set of reliable rules and limitations. These proved so strong that Gary Gygax later lifted them wholesale for his Dungeons and Dragons roleplaying game. There was also the use of post-apocalyptic Earth as the setting for the story. Many later epic fantasies, from Shannara to The Wheel of Time to the recent Shattered Sea, would do the same thing. There's also the impact Vance had on later writers, most notably Gygax and Pratchett but also George R.R. Martin (Vance is Martin's favourite author). In 1983 Vance himself penned a more traditional epic fantasy, The Lyonesse Trilogy, one of the all-time finest works of the genre.

Throughout all of this time J.R.R. Tolkein had been busy at home in Oxford, writing, re-writing, editing and re-editing The Lord of the Rings. The impact it would have when finally published is something the author, and the SFF world, was not expecting.
Posted by Adam Whitehead at 18:51

Glad to see mention of Leiber. Also, I don't think that Vance's Lyonnesse Trilogy is quite as well known as it deserves to be.

A correction to your timeline: when all this was going on, Tolkien wasn't writing LotR, he was arguing with publishers. The Lord of the Rings was finished by 1949, so it predates Narnia and the Dying Earth. The hold-up was because Tolkien's original publisher didn't want to publish it, but kept stalling; eventually, he found someone else who would publish it, though it took longer than planned.


Good point about Narnia's unsequential timeline, odd to modern readers. But then, that was the norm, wasn't it? The same is true of Lankhmar, Conan, etc.

Possibly the big influence there was Cabell, the dominant fantasy author of the first half of the century - his 'Biography of the Life of Manuel' was 20-odd novels theoretically linked together by one character (Manuel, who dies in the second book, but lives on through his descendents, through stories about him and so forth), but in practice only some of them follow chronological order, and many are even from entirely different genres, or even non-fiction.

Correct, although Tolkien didn't actually write the appendices until 1954-55 (delaying RETURN OF THE KING) so technically (if you squint a bit) he didn't finish writing the book until 1955.

The main point, of course, is that until it was published its impact or influence couldn't be measured, apart from on Lewis who'd been hearing and reading it as a work in progress.

Oh, true - I just thought it was worth clarifying in terms of influence in the opposite direction - that Tolkien was perhaps more of an innovator than 'published in 1954' suggests!

[Reminds me a little of another famous duo in Oxford at exactly the same time! Wittgenstein's "Philosophical Investigations" was the product of private work throughout the 30s and 40s, as displayed in the lectures he gave, but was not itself published until 1953, after Wittgenstein's death, by which time his lectures had already inspired a generation of Wittgensteinians whose work often responded to Wittgenstein before the wider world even knew what Wittgenstein had said. In particular, Gilbert Ryle, not a Wittgensteinian but a fellow-traveller in many ways, published his 'The Concept of Mind' in 1949. Controversy has raged ever since over whether Ryle was drawing without credit on Wittgenstein's work to pre-empt it, or whether Wittgenstein's final work was itself influenced by Ryle, and therefore which of the Wittgensteinians and the Ryleans represented, as it were, the senior linneage...]

As small, belated correction to the comment above: Wittgenstein taught at Cambridge, not Oxford.

The Dying Eart setting isn't postapocaliptic, Earth is dying as consequence of the time passed and the Sun depleting itself.
And Jack Vance didn't created that setting, Clark Ashton Smith, a partner of Robert Howard, invented that for his Zothiqe tales. Why didn't u included it?

Too, why you didn't included Alice though the mirror in the fist article?