New release date for THE THORN OF EMBERLAIN

Scott Lynch has announced that the release date for his next Gentleman Bastard book, The Thorn of Emberlain, has had to drop back to early 2016. 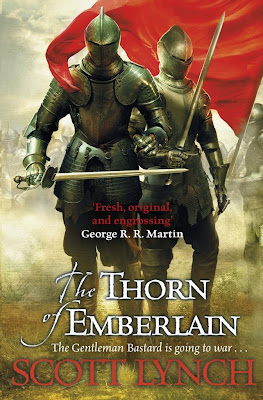 Lynch did confirm that the book is very close to being done and might have made it out before the end of 2015 with an accelerated production process he and his publishers didn't feel comfortable with, so the book will drop back a little to the spring instead. He hopes to confirm hand-in of the manuscript shortly.

The Thorn of Emberlain is the fourth book in the series, following on from The Lies of Locke Lamora, Red Seas Under Red Skies and The Republic of Thieves. It will be followed by three more volumes in the series, The Ministry of Necessity, The Mage and the Master Spy (possibly to be retitled) and Inherit the Night.
Posted by Adam Whitehead at 21:38

Email ThisBlogThis!Share to TwitterShare to FacebookShare to Pinterest
Labels: news, scott lynch, the gentleman bastard, the thorn of emberlain

Anybody know what the status is on the long awaited, much promised two-novella book "The Bastards and the Knives"/"The Mad Baron's Mechanical Choir"?

Sad to hear about this. Hope this isn't a result of a return of some of the mental health issues he has had in the past. Best of luck to Scott!

The novellas have been rejigged as an interquel novella bridging REPUBLIC and THORN. Status and release date is not known.

Shame about the delay, but eh, I'm one of those people who would prefer a delay and get a quality product than have something rushed and really FEEL rushed. It's better to wait.

Plus that means there's already something to be excited about in 2016!