CHILDHOOD'S END and THE EXPANSE get airdates

SyFy has confirmed the airdates for its mini-series based on Arthur C. Clarke's Childhood's End and the ongoing series based on James S.A. Corey's Expanse novels. 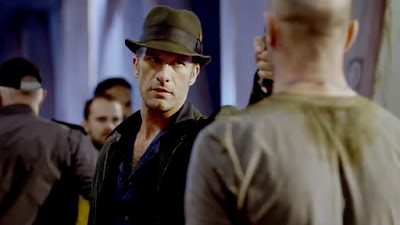 "Say what you like about my mother, but never insult the hat."

Childhood's End will air across three successive nights: 14, 15 and 16 December. The Expanse will debut with two episodes airing on 14 and 15 December, with a new episode every subsequent Monday. The Expanse will consist of a ten-episode first season based primarily on the first novel in the series, Leviathan Wakes, whilst a second season has already been provisionally approved.

The Expanse has been delayed from its originally-mooted early 2015 transmission date, leading to suspicions of problems. However, the very positive reception to an early screening of the first episode at Comic-Con suggests that SyFy instead wanted to hold it back to air as a one-two punch alongside Childhood's End, making for the kind of "event" programming the channel has lacked ever since Battlestar Galactica went off the air half a decade ago. The network is already boasting that The Expanse is the most expensive show in their history and they have made a firm commitment to it and a whole host of other genre programming after years of being perceived as only being interested in cheap-and-cheerful disaster movies and firmly Earth-set dramas.

It remains to be seen how successful this move will be.
Posted by Adam Whitehead at 20:28