Red Eagle Entertainment has withdrawn its curious attempt to sue Wheel of Time editor Harriet McDougall (also the widow of the series author Robert Jordan) for "slander" after she criticised their decision to self-produce an infomercial to try to hold onto the film and television rights to the novels. 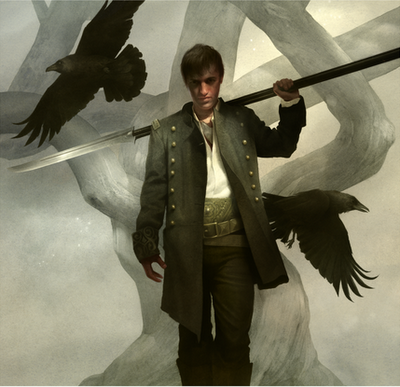 Way back in 2004, shortly before he was diagnosed with cardiac amyloidosis, Robert Jordan sold the film and television rights to The Wheel of Time to Red Eagle Entertainment for $600,000. There is some confusion over whether this was for the entire series (it seems rather low given the colossal popularity of the series at that time), or just for the first novel, The Eye of the World, by itself. In 2009, two years after Jordan's passing, Red Eagle signed a deal with Universal worth "seven figures", meaning that Red Eagle made a minimum of $400,000 on the deal. That option with Universal expired a couple of years later, after no film or TV project had gotten off the ground.

With Red Eagle having failed to get a project rolling, the TV and film rights would have reverted to the Robert Jordan Estate in February 2015. Red Eagle attempted forestall this by producing a near-zero-budget 25-minute infomercial based on the prologue to The Eye of the World, paying for it to be aired on FX. It appeared at least questionable if this fulfilled the terms of the deal and McDougall took legal steps to see what the position was, publicly declaring that the news came as a surprise to her. Red Eagle issued a legal threat of their own, stating that McDougall's comments were endangering negotiations with interested parties (specifically, Sony TV, the studio behind Breaking Bad, amongst others) that may have led to a Wheel of Time television series being made.

Red Eagle's decision to abandon this legal posturing a month ago was accompanied by confirmation that the Jordan Estate and Red Eagle were continuing to talk about the situation. It is possible that Red Eagle's move is a strategic one, de-escalating the situation in return for a slice of whatever film or TV deal is eventually made.

Full legal clarification of the situation needs to be made, but with the appetite for fantasy on TV never higher than right now and with The Wheel of Time inarguably the biggest name in the genre not attached to any development deal, it needs to be resolved quickly if the biggest epic fantasy series since Tolkien isn't to miss its best-ever shot at getting on the screen.
Posted by Adam Whitehead at 20:00

Time they sorted themselves out and begon shooting the TVS series . Grow up and do the world a favour and do the darn series !

I agree completely. tell them to pull their thumbs out and get on with it for the fans!