A History of Epic Fantasy - Part 4

In any discussion of the development of epic fantasy one work looms over the rest to such a titanic extent that, for years, the subgenre was often said to consist of just it and a few pale imitators: The Lord of the Rings. That perception has changed over the last two decades, but it remains the most important book in the development of the field. 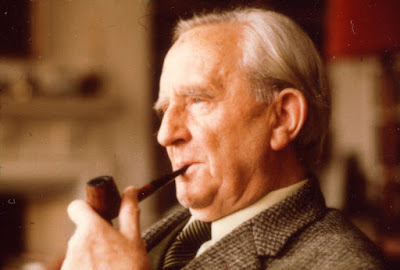 J.R.R. Tolkien towards the end of his life, having completed Lord of the Rings and while he was still working on The Silmarillion.


As mentioned in Part 2, John Ronald Reuel Tolkien had begun writing "The Hobbit II" in December 1937. He envisaged the book as a short sequel to The Hobbit, written in a similar, jovial tone and focusing on Bilbo's nephew Bingo. The storyline would focus on the magical ring that Bilbo had found in Gollum's cave and would feature the Necromancer (an off-screen villain in the prior book) as the main antagonist.

Despite sketching out a few chapters in that mode, Tolkien seemed to find it limiting. He'd already written The Hobbit and writing it again did not seem particularly interesting. There was also a change in his structuring of the story. The Hobbit had started off a self-contained tale, but it had "strayed" into Middle-earth, the setting for Tolkien's massive mythological cycle The Silmarillion, which he'd been working on since 1917. Although that change had come too late to really change the tone and direction of The Hobbit, it was something he was acutely aware of when starting the sequel. He realised early on that the Necromancer could be Sauron, the chief lieutenant of the Dark Lord Morgoth from the earlier work. Although Morgoth had been defeated at the end of The Silmarillion and cast into the void, Sauron's fate was not mentioned, allowing Tolkien to redeploy him for this new work.

This resulted in a shift and transformation in the tone of the story, a move away from another children's adventure into something grander, bigger and more sophisticated. Tolkien kept modestly referring to it as "The Hobbit sequel" long after it had passed the earlier work in word count (the new book would end up being five times the length of the earlier), but eventually he revealed a more epic title: The Lord of the Rings.

Work on the book proceeded for ten years. There were many interruptions. Tolkien lost the thread of the story on several occasions, at one point pausing the writing for over a year. The complexity of dealing with two separate narrative strands (Frodo and Sam on their way to Mordor and the rest of the Fellowship in Rohan and Gondor) stymied him for a while until he hit on the idea of writing the two stories sequentially and separate from one another, reuniting them only at the end: a device unconsciously, perhaps, echoed in later fantasy authors who would rest characters and storylines for a book or two and pick up with them later on. At various points he'd stop and rename characters: Bingo was switched to Frodo fairly early on. Worldbuilding also became a concern: Tolkien drew a map that was, by the end, so heavily annotated and amended that his son Christopher had real problems when it came to deciphering it to produce a version for inclusion in the book itself. Tolkien also found himself bogging down the narrative at key points with lengthy infodumps about the history of his invented countries and languages. Most of this was removed to the appendices in the writing process, allowing the narrative to (despite its eventual bulk) remain focused on the core storylines.

Tolkien completed writing The Lord of the Rings in 1947; revisions and typing up the massive manuscript took a further two years. However, publication was delayed due to Tolkien's decision that he also wanted The Silmarillion published as well. This proved difficult because it wasn't finished. The publishers of The Hobbit, Allen and Unwin, were unwilling to consider the manuscript since it was incomplete, but also had doubts about its commercial potential compared to the more traditionally-structured Lord of the Rings. Unwisely, Tolkien saw this report and was unimpressed. In 1950, he offered both books to Collins, who were more willing to entertain both works and also had more capacity to print them: paper was still being rationed in the aftermath of WW2 and Collins, as a stationary company as well as a publisher, had access to larger stocks. Unfortunately, delays and a late decision to edit the two books down led to Tolkien abandoning his relationship with Collins in 1952.

Tolkien returned to Allen and Unwin and they agreed to publish The Lord of the Rings - which was complete apart from the appendices - and hold fire on The Silmarillion until it was actually done. Further delays, issues with the printers and a late completion of the appendices meant that the book was not finally out, in full, until three years later. Ongoing paper shortages meant that the book had to be split into three volumes, with The Fellowship of the Ring and The Two Towers being published in 1954 and The Return of the King in 1955. Tolkien had just inadvertently created the Traditional Epic Fantasy Trilogy, despite his strenuous later protests that it was one novel.

Early reactions were mixed, with enormous praise from the likes of C.S. Lewis and W.H. Auden muted by a lot of dire reviews. Despite the mixed reception and the fact that the books were more expensive than most, sales were buoyant and Tolkien soon found himself receiving royalty cheques dwarfing his annual income from teaching. He soon began receiving fan mail, some of it written in his own Elvish languages (to his delight), from people all over the world.

Yet, The Lord of the Rings remained only a modest success. It was known in SFF circles, certainly, but it was not immediately obvious that it was a gamechanger in the genre. For that to happen took an act of piracy. 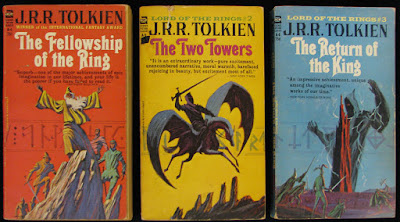 The unauthorised 1965 Ace Books editions of The Lord of the Rings. Despite being unauthorised, they were actually more faithful to the original text than the authorised ones, having less typos and much better cover art.

In 1965 Ace Books in the United States released their own copy of The Lord of the Rings, citing a failure by Houghton Mifflin (the authorised US hardcover publisher) to copyright the book. The Ace Books paperback edition of The Lord of the Rings was wildly popular, selling 100,000 copies in just a few months and exposing a hunger for a paperback edition of the work. Houghton Mifflin corrected their error and released an authorised paperback, but it was more expensive than Ace's. To everyone's surprise, Tolkien himself then joined the fray. Despite having little to no interest in SFF fandom (he was a fan of Isaac Asimov, but little else) and having declined multiple times to visit the United States, he began a letter-writing campaign, calling upon his fan and author connections built up over a decade. Soon fans were demanding that the unauthorised edition be pulled from sale, and bookstores began to refuse to stock it. Aware of the negative PR, Ace apologised and made Tolkien several royalty payments. "The War Over Middle-earth", as it was dubbed in the press, had ended but it had been a reasonably big news story for several months.

The result was less of a boom in sales than a titanic explosion of popularity. Suddenly, everyone was reading Tolkien. Everyone had an opinion on it, Tolkien was receiving requests from fans urgently demanding a sequel (he placated them with news that he was revising The Silmarillion and working on new background information and stories, which later ended up in Unfinished Tales) and, most bizarrely, Leonard Nimoy relased a music video about Bilbo Baggins. Even the Beatles expressed interest in buying the film rights.

Tolkien was bewildered by this turn of events, but was not totally dismayed by the "grosser forms of literary success". It allowed him and his wife to live comfortably and to provide for their children and grandchildren. It also allowed him to buy a car (which given his hatred of the internal combustion engine was remarkable) and got him interviewed by the BBC.

Tolkien died in September 1973 at the age of 81. He left behind The Silmarillion in an incomplete state, but he had been working with his son Christopher to get his notes in an orderly state and to arrange for the book to be finished in the light that he would not be able to do it. He also left behind other stories, notes and fragments which later saw the light in other books. Tolkien even left behind recollections and some notes on his childhood, perhaps feeling that if someone was going to write his life story they should have as much information as possible (this helped Humphrey Carpenter immensely in his writing of Tolkien's biography).

The influence he left behind was seismic. In fact, it was so seismic that no other writer seemed to know how to respond. It would be over twenty years after publication that the first works written in the shadow of The Lord of the Rings would start to appear. But its impact was notable early on: in a review of Dune, Arthur C. Clarke stated that he could compare it to nothing other than Lord of the Rings (Clarke was a fan of the book, also referencing it in his novel 2010 when he compares the hellscape of Jupiter's moon Io to Mordor). Other writers decried it, with Michael Moorcock in particular lambasting it for its conservatism and safety at a time of increasing literary experimentation. But it was clear that something had changed in the fantasy genre as a result of the book, and the impact of that was going to be remarkable.
Posted by Adam Whitehead at 16:45

Email ThisBlogThis!Share to TwitterShare to FacebookShare to Pinterest
Labels: history of epic fantasy, j.r.r. tolkien, lord of the rings

Great series of articles! Keep up the good work :)

Your URL to "Leonard Nimoy's Ballad of Bilbo Baggins" is no longer valid.
Try this one: https://www.youtube.com/watch?v=XC73PHdQX04