2017 Worldcon to be held in Helsinki

The 2017 World Science Fiction Convention will be held in Helsinki, Finland. Although not "officially" confirmed yet, the news has broken at the 2015 Worldcon, currently ongoing in Spokane, Washington. 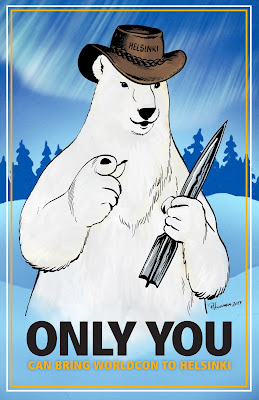 This is good news for international SFF fans. After the success of the 2015 Worldcon in London, the convention has returned to the United States for two years in a row: Spokane and next year's Kansas City. There were fears that Worldcon could end up staying in the USA for four years, with Washington, D.C. throwing their hat in for 2017 and, at present, only San Jose and New Orleans being in the running for 2018.

Helsinki and a strong bid from Dublin for 2019 break that up nicely and will hopefully keep Worldcon moving all over the globe so SFF fans from different parts of the world get a chance to attend.
Posted by Adam Whitehead at 12:51

So will this be HelskinKon?