In a surprising move, the American CBS network has picked up the TV rights to Ian McDonald's Luna duology. The first novel, New Moon is not even published until 17 September. 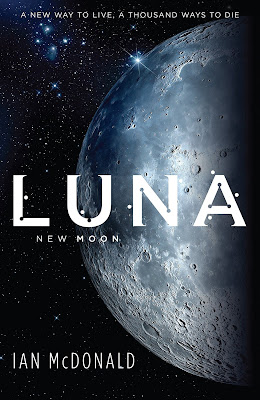 Shane Brennan, the showrunner of NCIS: Los Angeles, picked up the right after a bidding war with rival broadcasters. The book is set in 2110 when the moon has been colonised and heavy industry has created a booming economy. Five powerful business families control the moon, one of which is targeted for a hostile takeover. It falls to the matriarch of the family and her five children to defend themselves.

The book has picked up some good pre-release press, but being optioned like this is surprising and good news for Ian McDonald. More than one commentator has picked up on possible similarities to  Dallas (McDonald has even called Luna "Dallas on the Moon") and Fox's family music drama Empire, except that Luna will presumably actually be watchable.
Posted by Adam Whitehead at 12:26