Half a War by Joe Abercrombie

Father Yarvi has brokered an unlikely peace between the formerly warring kingdoms of Gettland and Vansterland, bringing them together to stand against the forces of the High King. Still tremendously outnumbered, Yarvi is forced to rely on an untested young queen to help lead the way to victory and a last stand at the fortress of Bail's Point. 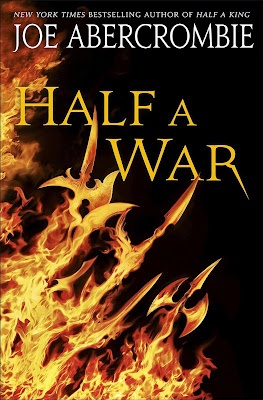 Half a War concludes the Shattered Sea trilogy by Joe Abercrombie, an experiment by the British author to write shorter novels aimed at a more general audience. How successful that experiment has been is quite debatable - the tone and feeling of the trilogy is really not far removed from his First Law universe novels - but it's certainly resulted in the impressive delivering of three very decent novels in less than eighteen months.

As with the previous book, Half a War revolves around three main POV characters: Skara, the young and untested queen of Throvenland; Raith, the bloodthirsty Vansterland warrior made into Skara's reluctant bodyguard; and Koll, the woodcarver turned minister-in-training who finds himself increasingly serving as Yarvi's conscience as Yarvi is forced into more and more desperate acts to try to save his people. Previous POV characters become secondary characters in this novel, which is both clever (showing how others see them) and frustrating, particularly when they don't all survive.

This is a war story, with the great fortress of Bail's Point changing hands as the fortunes of the conflict ebb and flow. Abercrombie has done big war stories and battle narratives before and does a good job of depicting the conflict here, helped by a map of Bail's Point. However, the limited POV structure means that a great deal of the details of the conflict are missing. This is effective in giving us a feel of the fog of war, with confusion and misinformation lurking everywhere, but it does occasionally make the conflict feel murkier than it should.

Abercrombie's razor-sharp characterisation is on top form here, with Skara developing believably into a ruler from humble beginnings and secondary characters like Blue Jenner and King Uthil getting outstanding and memorable moments. However, it's Father Yarvi who develops most fascinatingly in this novel. Yarvi's ruthlessness was on display in the second book, but in this one it pushes him into more and more dangerous decisions that even shock his allies. The development of Koll as his moral weathervane is nicely done; without Koll, it may be that Yarvi would have become another version of Bayaz from the First Law books (i.e. Unrepentant Amoral Bastard Gandalf). As it stands he comes pretty damn close, and it's likely any future Shattered Sea books will have to deal with the fallout from his actions.

Half a War (****) closes the Shattered Sea trilogy in style, with a war story that prioritises the characters over the action and ends well by not pulling a single punch. The novel is available in the UK and USA now.
Posted by Adam Whitehead at 19:52

Email ThisBlogThis!Share to TwitterShare to FacebookShare to Pinterest
Labels: half a king, half a war, half the world, harpercollins voyager, joe abercrombie, the shattered sea

Interesting review as usual, thanks!
Wert, you are making a remark about future Shattered Sea books. Does Abercrombie have plans to return to this setting?

I believe the situation is that Voyager will be happy to do them if Joe is happy to write them.

I agree with your comment about Yarvi. He seems very very close to being Bayaz. This book left me feeling a little sick at the end - while an anti hero is fascinating, it feels terrible to see someone we met as a young bullied child grow up into what Yarvi has become.

The series turned out to be very similar to Mark Lawrence's Broken Empire Trilogy. Though I liked this series a lot I have to say it is no match on that one.