1981 version of STAR WARS gets a very limited re-release

Back in June, the Academy of Motion Arts and Sciences in Los Angeles held a special screening of both the original Star Wars (1977) and Rogue One (2016). Fans were expecting Star Wars to be the 2004 version of the film, which is effectively the 1997 Special Edition with some minor tweaks. 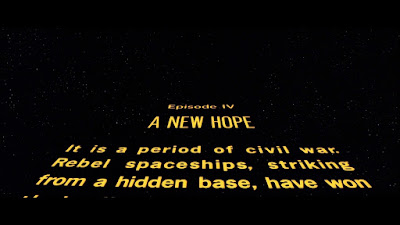 Much to their surprise, they instead got what appears to be a completely new print of the 1981 "second version" of the movie, which was re-released in cinemas in the aftermath of the release of The Empire Strikes Back. This is identical to the original 1977 movie with the sole exception that the opening crawl has been adjusted to have the subtitle A New Hope added.

Details are scarce, so it's unclear if the film has been further cleaned up from the original (such as having visible matte lines around models eliminated) or if it's simply a 1981 print of the movie that's undergone extensive restoration work, which is more likely.

This marks the first time that the "original" version of the movie has been released to the public (albeit in a limited way) since the 2006 "extremely limited edition" release of the original trilogy on DVD, which sold out almost instantly and now goes for considerable sums on the collector's market.

Some fans have pondered if this means a wider re-release of the original, unaltered trilogy is on the cards, perhaps to help launch Disney+ later this year. That's entirely possible, although it is also possible that this was for a special, one-off performance. Apparently, George Lucas was asked to give his approval to the showing. Although he no longer has any ownership of the Star Wars franchise, Lucas has been adamant that the 2004 "final" versions of the original trilogy are his preferred edition of the film and he considers them to be canonical. Kathleen Kennedy has indicated that Disney will respect his wishes in this, so those hoping for a wider release may be disappointed, at least at this point.

Still, the fact that Lucas relented on this occasion may give (a new) hope to those hoping to see the original, untouched trilogy back on release at some point in the future.
Posted by Adam Whitehead at 21:54

Put it on blu-ray / iTunes, Disney! Along with other 2 un-altered (The Empire Strikes Back and Return of the Jedi)

Its a cliche to say it but Han shot first.