THE ORVILLE moves from Fox to Hulu for Season 3

In a surprise move, Fox's science fiction dramedy show The Orville will be moving to Hulu for its third season, after Fox already renewed the show. 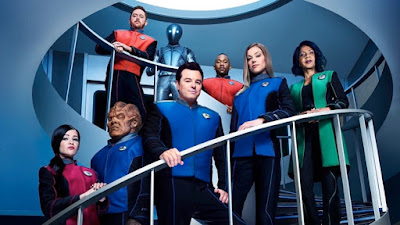 Creator/showrunner/star Seth MacFarlane confirmed the move had come about through mutual discussions, as production requirements for The Orville had become more elaborate over the course of the first two seasons and MacFarlane was unable to guarantee delivery of new episodes before 2020 due to more extensive effects work being required for the new season. Rather than risk there being a hole in Fox's schedule, they agreed to move The Orville to the Hulu streaming service. Fox will now be free to pick up a less intensively-scheduled show as a replacement and The Orville can continue with greater financial and creative freedom.

The move to Hulu will also allow the show to explore more adult themes and humour, if MacFarlane wishes.

The move is extremely unusual, but a sign of the extremely high regard that MacFarlane is held in at Fox, where his animated shows Family Guy and American Dad have provided reliably high ratings hits for the network for two decades.

Some Star Trek fans have expressed amusement at the news, noting that Orville fans were highly critical of the new Star Trek shows being moved behind a paywall at CBS All Access and now the same has happened to that show (although Hulu is much more readily available and has vastly more content than the much newer CBS service).

Unfortunately, the move is unlikely to help British viewers who still can't see the show, at least not in HD: it airs news episodes only on a paywalled channel and past episodes are not available to stream. It is also available only on DVD (in 2019, somehow), and no Blu-Ray release for the series is planned.
Posted by Adam Whitehead at 22:54