In a startling move, Games Workshop have teamed with veteran US TV producer Frank Spotnitz (The X-Files, The Man in the High Castle) to bring their massive Warhammer 40,000 gothic space opera universe to live-action television, starting with an adaptation of Dan Abnett's Eisenhorn series of novels. 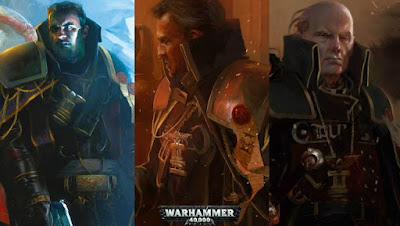 The Eisenhorn saga currently consists of eight novels in three sub-series (with two more novels on the way). The opening Eisenhorn Trilogy (which is actually now four books) tells the story of Gregor Eisenhorn, an Inquisitor whose job is to root out heresy in the Imperium of Humankind and destroy Chaos cults. He is supported in this by a team of investigators and soldiers. Eisenhorn is prepared to use whatever steps are necessary to defend the Imperium, but when a much greater threat is revealed he decides to take some unorthodox and dangerous steps to destroy it, including turning the enemy's own evil powers against it.

The subsequent Ravenor Trilogy follows a former student of Eisenhorn's as he builds his own team and takes on a new threat to the Imperium. The in-progress Bequin Trilogy focuses on a female Inquisitor and a showdown between Ravenor and the now-disgraced Eisenhorn.

This is a very canny move by Games Workshop. Bringing the full epic scale of the Warhammer 40,000 setting - complete with city-sized battleships, skyscraper-sized war mecha, eight-foot-tall superhuman warriors, Cockney wideboy orks, insane magic and even more insane technology - to television is probably impossible even if you had five times the budget of Game of Thrones. But the Eisenhorn stories are much smaller in scale, with a strong focus on a small cast of characters engaging in investigative and undercover work. This will allow the Warhammer 40,000 universe to be introduced gently to sane viewers and will allow them to expand to other parts of the setting later on.

Fans may be slightly disappointed they're not going for something like the Horus Heresy straight out of the gate, and in fact this series probably won't even feature the iconic Space Marines in a major role (a couple of Deathwatch Space Marines play a role in some of the later books, but not up front), but it's a smart and interesting choice by Games Workshop to get casual viewers interested in the setting.

Before we get too excited, though, it should be noted this is a development announcement, not a formal greenlight. Spotnitz needs to get a studio and TV company interested in actually making the show.
Posted by Adam Whitehead at 21:57

The Deathwatch appears in the first book. As so does a Chaos Space Marine. I think that the SM show up again only in the last trilogy