HBO has released a new, longer trailer for Watchmen, their sequel TV series to the Alan Moore graphic novel.


The TV series is set several decades after the events of the graphic novel. Dr. Manhattan is apparently still living on Mars and the United States is caught in a tidal wave of panic, triggered by a band of vigilantes wearing masks and aping the slain Rorschach. They mount an attack on the police force of Tulsa, Oklahoma, which seems to backfire when it allows police forces across the US to become more militarised and crack down on masked heroes.

Adrian Veidt/Ozymandias (Jeremy Irons) is still around, as apparently is Laurie/Silk Spectre (Jean Smart), now an FBI agent having taken the surname of her late father, the Comedian. 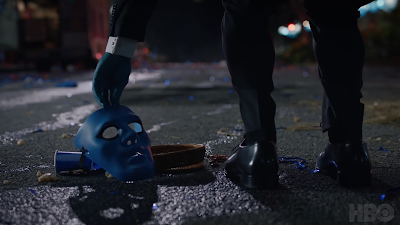 Watchmen will debut in the United States on HBO in October and (presumably) will air on Sky Atlantic in the UK.
Posted by Adam Whitehead at 22:34