THE EXPANSE renewed for fifth season at Amazon

In an impressive display of confidence, Amazon has renewed The Expanse for a fifth season, despite Season 4 not being due to air for another five months. 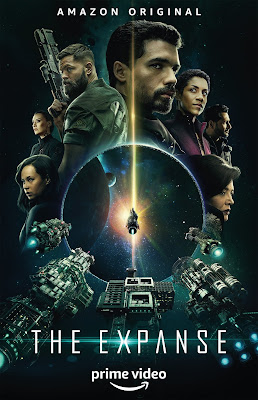 The first three seasons of The Expanse were produced by Alcon Entertainment for SyFy, but SyFy cancelled the show after the third season due to low ratings and high costs, despite the show delivering blanket critical acclaim and giving the network its biggest critical hit since Battlestar Galactica ended a decade ago.

The series was revived on Amazon after negotiations, during which it was revealed that Amazon CEO Jeff Bezos was a huge fan of both the TV series and the original books written by Daniel Abraham and Ty Franck (under the pen name "James S.A. Corey").

The early renewal appears to be down to the show's production requirements, with cast and crew already ready to roll on the next season, and the desire to limit the gaps between seasons. This move should allow Season 5 to air a year or maybe even less after Season 4.

I appreciate this is said everywhere and elsewhere but there is a lot of television about.